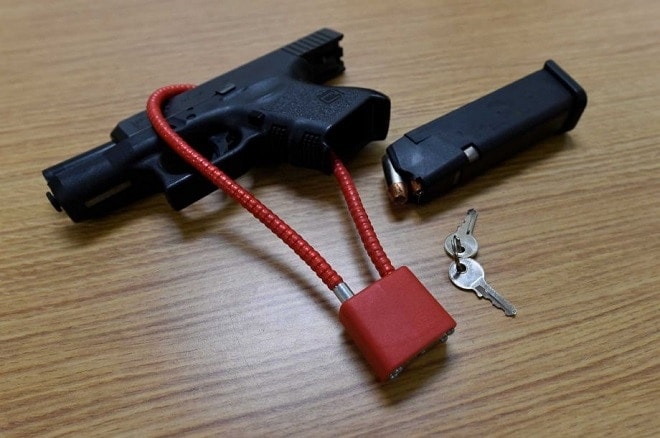 Locking up firearms not in immediate use in Albany is now law. (Photo: Skip Dickstein/Albany Times-Union)

Taking effect Thursday, New York’s capital city became the fourth municipality in the state to enact laws mandating guns not in use be locked up under threat of fines and jail time.

The city joined Rochester, Buffalo and New York City as well as Westchester County as a whole, in adopting the safe storage requirements.

Gun control advocates see the move as a big win.

“We are proud to stand with Albany’s leaders to welcome this new law, which will help reduce gun thefts, keep guns away from children, and reduce gun injuries and deaths,” said New Yorkers Against Gun Violence Executive Director Leah Gunn Barrett, in a statement. Barrett was on hand Thursday for an event at Albany Police Headquarters where free gun locks were being distributed.

The measure was approved in a 14-1 vote of the Albany Common Council last September.

Albany Local Law A-2014 mandates all firearms, including rifles and shotguns, be secured inside a locking container or box or disabled with a lock, with penalties for non-compliance ranging to from a $250 fine and 15 days in prison for first offenses to as much as a year in jail for subsequent violations. Further, retailers selling firearms in the city must post a notice that notifies purchasers of the safe storage law and the penalties incurred if the law is violated.

Any instance in which a gun deemed improperly secured is involved in a shooting is automatically eligible for the maximum penalty.

Albany Police Chief Brendan Cox, advising that free gun locks are available at two APD stations, paints the new law as helping to keep firearms out of the hands of those who couldn’t ordinarily get them.

“By requiring guns to be safely locked or stored, this law will help prevent one of the scourges that makes all Americans less safe– guns that are stolen and end up in the illegal market and in the hands of criminals,” said Cox.

The chief subsequently explained to the Albany Times-Union that, while his officers will not be actively going into area homes to look for violations, they will use discretion on issuing citations if unsecured guns are found when called to a home for other reasons.

Gun rights groups in the state argue measures such as Albany’s only penalize those gun owners who obey the law.

“The city of Albany would be better served if it looked at root causes of violence, and not the tools that criminals use to carry out that violence,” said NY2A Grassroots Coalition co-founder Jake Palmateer previously. “Many residential burglaries go unsolved, so if someone has a break-in and a firearm is stolen, the victim would very likely end up the only person arrested.”

While mandatory gun storage laws have been challenged all the way to the U.S. Supreme Court, they have withstood scrutiny. However, some justices take exception to such laws, saying a controversial ordinance in San Francisco violates the Second Amendment as it leaves gun owners unprepared inside their home at the worst time.

“The law thus burdens their right to self-defense at the times they are most vulnerable—when they are sleeping, bathing, changing clothes, or otherwise indisposed,” wrote U.S. Justice Clarence Thomas last July.

Meanwhile, NYAGV is advocating for a statewide gun lock bill, Nicholas’s Law, named for 12-year-old Nicholas Naumkin, who was fatally shot while by a friend who had found his father’s unlocked and loaded handgun.

“We encourage the State Legislature to follow Albany’s lead and enact Nicholas’s Law without delay to protect all New Yorkers before other lives are lost,” said Barrett.