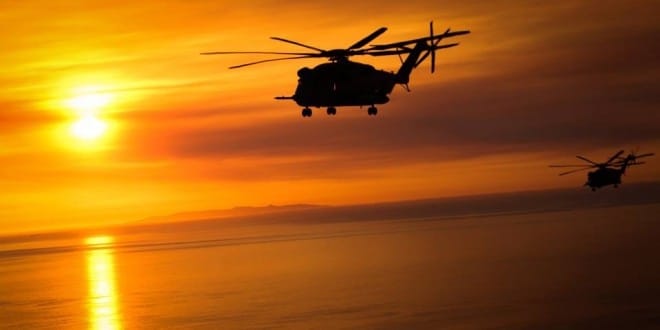 Two CH-53Es and their 12 Marines are missing off the coast of Hawaii. (Photo: DOD)

Search and rescue operations are underway in Hawaii for two Marine helicopters and their 12 currently unaccounted for Marines.

“Marine Corps Forces Pacific are currently working with the U.S. Coast Guard District 14 in ongoing search and rescue operations for two Marine CH-53E helicopters that were conducting a training flight off the coast of Oahu,” noted Maj. Christian Devine in a statement. “The aircraft are from Marine Heavy Helicopter Squadron 463, Marine Aircraft Group 24, 1st Marine Aircraft Wing from Marine Corps Base Hawaii.

We can confirm there are 12 Marines currently unaccounted for as a result of this incident, and officials will provide more details as they become available.”

Further, the Public Affairs office for Marine Corps Base Hawaii is asking the public to not touch any debris that comes ashore from the CH-53s that crashed and to respect any cordons that the Honolulu Fire Department and Police have established.

“If you’re on the North Shore today and come across any debris onshore that appears to be from last night’s helicopter crash, please do not touch or move it,” note the base in a statement. “Please note the location and call the Coast Guard at 808-535-3333. Our thoughts and prayers are with the Marines on board these aircraft, and their families.”