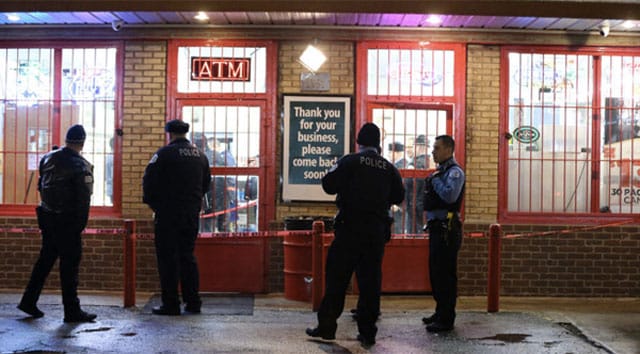 Tensions with police mounted briefly after someone snapped a photo of the dead teens and posted it on social media. (Photo: Chicago Tribune)

Two teens were shot and killed Saturday night while attempting to rob a liquor store in Chicago’s Gresham neighborhood, and apparently this wasn’t the first time the store has been targeted, nor the first time an employee fought back.

As reported by the Chicago Tribune , the two suspects, at least one of whom was armed with a gun, walked into the business, which has a sign on the door indicating guns are prohibited, around 8:30 p.m. and announced a robbery.

One of the suspects stood at the counter, while the other jumped over the counter and began assaulting the clerk. But a relative of the store owner heard the commotion from upstairs, grabbed a gun and walked down to investigate. From the stairwell, the relative could see the two suspects and, fearing for the safety of the clerk and protecting the business, opened fire on the robbers. Both suspects were struck multiple times.

Bruce Jones was sitting in a vehicle parked across the street when the attempted robbery unfolded. After hearing the gunshots, he ran into the store and saw the two suspects lying on the floor “bleeding out.”

When authorities arrived on the scene, both suspects were pronounced dead, and later identified as Keshawn Marzette, 15, and William Larson, 17.

“Greed and being thirsty, that’s what gets you killed,” Jones said. “You just can’t go taking people’s stuff.”

Investigators have reason to believe the teens may have been responsible for at least two other robberies, but a female patron, who did not wish to be identified, indicated this was the wrong place to rob.

“They don’t play, and I don’t blame them,” the woman said of the store owners, also noting they were targeted for robberies in the past.

On August, 11, 2011, two men tried to rob the store, but one was fatally shot by an armed clerk during a scuffle.

Saturday’s incident was the second time within a week that would-be victims in Chicago fought back against their assailants. On Wednesday, two suspects were shot by a concealed carry license-holder during an attempted robbery of a mobile phone store in Calumet Heights.