Israel Weapon Industries unveiled a semi-auto version of their X95 bullpup this week at the 2016 Shooting, Hunting, Outdoor Trade Show in Las Vegas.

IWI’s Tavor X95 first appeared last year and, as a select-fire weapon in 5.56mm, .300 Blackout and 9mm, was aimed at military and law enforcement sales. Now, with a legal semi-auto variant and interchangeable 16.5-inch barrels (17 inches in 9mm) similar to the SAR series, the X95 is ready for the larger civilian market.

IWI’s latest entry features a tri-rail forearm with three removable vented covers. Unlike the traditional Tavor, the X95 has its charging handle closer to the center of balance near the trigger guard rather than forward near the muzzle.

The carbine takes another step away from the Tavor by incorporating an ambi mag release that mimics that of the AR-15 series. The two-position safe/fire lever is on the left hand side of the gun for easy thumb actuation by right-handed shooters. 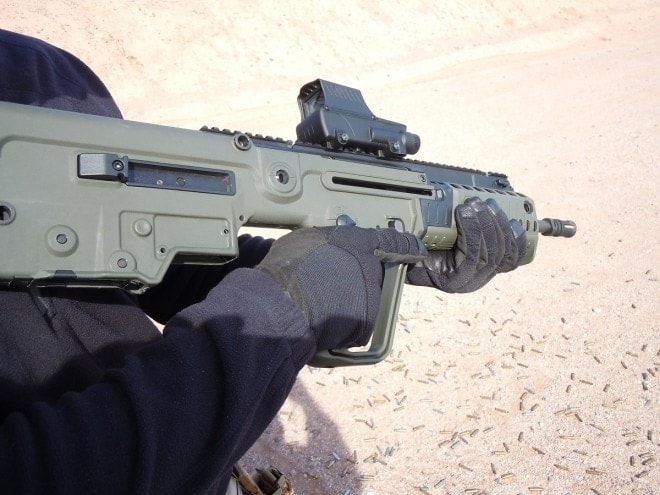 Previously just available to military and LE sales, the X95 is now being marketed to civilians in a semi-auto variant. (Photo: Chris Eger/Guns.com)

While the trigger pack allows for swap out with legacy Tavor groups, the X95’s trigger breaks at a very sweet 5-6 pounds.

As a bullpup design, the magwell is to the rear of the pistol grip and accepts standard AR-15/M16/STANAG magazines. IWI used black Magpul Gen III PMAGs at Industry Day at the Range and, while the manual of arms to load and unload takes a minute to get used to for those more familiar to AR and AK series rifles, was quick and easy once the learning curve is passed.