Due to coverage of guns, bill introduced to register journalists 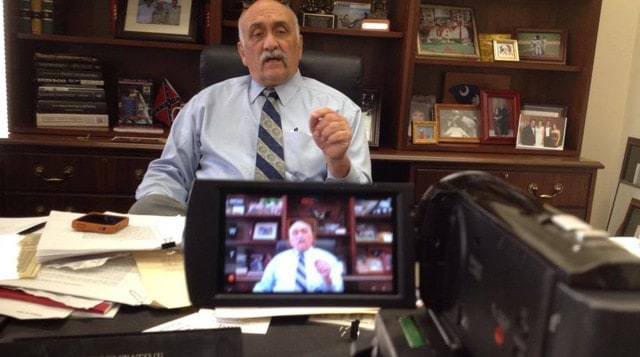 South Carolina Rep. Mike Pitts in a situation where two cameras are pointed at him. (Photo: Facebook)

A South Carolina lawmaker cited coverage of guns when he introduced a bill Tuesday that would require journalists in the state to register with the government before reporting news.

According to the summary of the bill, dubbed “South Carolina Responsible Journalism Law,” it would require journalists and media organizations to register and pay fees to the Secretary of State. There would also be fines and criminal penalties for violating the law.

Somewhat ironically, the bill’s sponsor, state Rep. Mike Pitts, said he introduced the bill because of the elusive media’s attack on Constitutional rights.

“I filed this legislation as an experiment to make a point about the media and how they only care about the constitution when it comes their portion of the 1st Amendment,” he wrote on social media.

“The only portion they care about is freedom of the press. They constantly attack people who follow their Christain (sic) beliefs and attempt to portray them as bigots, and they certainly do not like the fact that normal everyday Americans gather to petition the government and air grievances,” he continued. “Look no further than how they have demonized the Tea Party. Furthermore, they love to trample on our 2nd Amendment rights to ‘Keep and Bear Arms’. If they had their way, there would be no 2nd Amendment.”

Pitts told Charleston’s Post and Courier that the bill had nothing to do with the newspaper’s investigation into his campaign spending or its exposé on domestic violence in South Carolina worsened by loose gun laws and lack of state funding to shelter victims.

Media representatives in the Palmetto State have raised issues with the measure, which is unlikely to pass.

Bill Rogers, executive director of the South Carolina Press Association, told the Associated Press that he’d lobby hard against the measure, which he said he found bizarre.

“Any registration of journalists would be unconstitutional — unless you lived in Cuba or North Korea,” Rogers said.