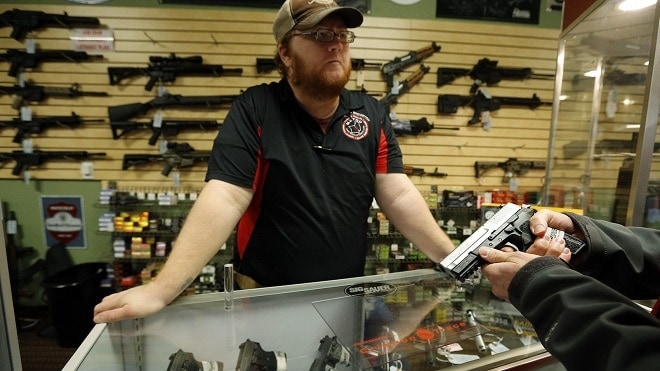 Under a new bill, gun owners in California would be limited to a maximum of 12 gun buys per year, of all kinds. (Photo: Jim Young/Reuters)

A powerful state lawmaker with the strong support of gun control groups has introduced a bill to cap sales of rifles and shotguns in the state to one per month.

The measure, proposed in the state Assembly on Tuesday, would expand California’s current gun rationing on handguns to include all firearms and is billed by supporters as a means to reduce gun trafficking.

“It is mind boggling that a person – no matter their intentions – could purchase as many rifles or shotguns that they want at any given time,” said Assemblymember Miguel Santiago, D-Los Angeles, who currently serves as Majority Whip in that chamber. “This is a common sense solution to gun violence in California.”

Santiago’s legislation, AB 1674, would prohibit more than one sale of any firearm to an individual inside a 30-day period. While the waiting period is currently in effect for handguns bought through a dealer only, the new bill includes language that would broaden its application to include all guns, including those sold through private transactions.

Lawmakers cite a 2007 University of Pennsylvania study that found a quarter of all guns used in crime were originally part of a multi-gun purchase and that experts believe unstable individuals frequently move to stockpile large quantities of weapons for use in mass shootings, as reasons for this latest gun control endeavor in a state that already has some of the strictest gun laws in the nation.

“It is past time for us to treat long guns the same as handguns – they hold equal powers of destruction and create major problems for law enforcement, and society in general, when they fall into the wrong hands,” said Santiago.

The bill has the initial support of the Brady Campaign and the Law Center to Prevent Gun Violence.

“The California Legislature enacted a law to limit the purchase of handguns to one per person per month in 1999,” Juliet Leftwich, legal Director of the Law Center to Prevent Gun Violence in a statement released by Santiago’s office. “We encourage the Legislature to enact AB 1674 to impose similar limitations on the purchases of long guns, given the significant role they play in our gun violence epidemic.”

California could see 2016 as a bumper year for new gun laws.

Lt. Gov. Gavin Newsom, a 2018 gubernatorial candidate, is backing a ballot initiative that reads like a wish list for gun violence groups while two bills were introduced last week with the support of the state attorney general to end the use of bullet buttons and require those in circulation to be registered.

State Senate President Pro Tem Kevin de Leon, like Santiago a powerful Los Angeles area Democrat, hinted earlier this month he is working on a package of gun control bills of his own. De Leon gained a good bit of infamy on social media for his “Ghost Gun”  bill in 2014.

Gun rights advocates argue the concept of gun rationing runs counter to the right to keep and bear arms.

AB 1674 is pending referral but will likely be sent to the Assembly Public Safety Committee for a hearing in March.