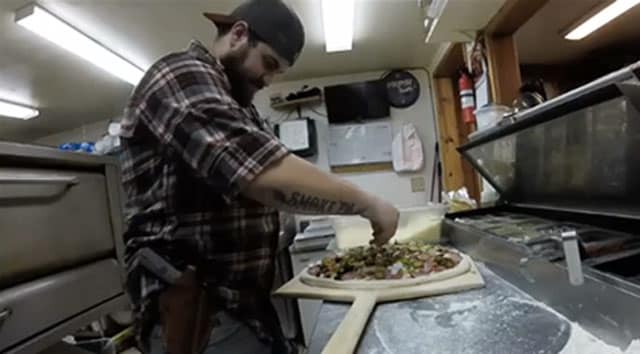 Matthew Willhite wears many hats while working at his family’s pizza joint, but says he’s no hero. (Photo: KTUU)

An attempted robbery at a clothing store inside an Anchorage mall Sunday afternoon was thwarted thanks to the help of a man who was out shopping with his family while carrying a 1911 .45 ACP.

According to reports from the Anchorage Dispatch News, police spokeswoman Anita Shell said the 18-year-old suspect stuffed about $1,200 worth of clothing into a bag while in the dressing room of the Buckle Clothing Store just after noon. Employees already suspected the young man was attempting to shoplift the items and called in security.

As the suspect, who was later identified as Yan Bangout, attempted to exit the store with the merchandise, he was stopped by a security guard. But the confrontation resulted in a tussle and Bangout pulling a gun from his waistband. That was just about the time Matthew Willhite was walking nearby.

“All of a sudden he’s screaming gun, gun, gun!” Willhite recalled to KTUU after the incident.

Willhite, the son of a police officer, said the security guard was struggling to subdue the suspect, so he took action. He pulled his gun, went to the side where Bangout was looking at him, warned him that he wasn’t the only one with a gun and he “better drop it.”

Bangout eventually heeded Willhite’s warning and dropped the gun. Willhite then held him at gunpoint until police arrived on the scene and arrested him.

Bangout was charged with robbery, theft and four counts of assault. He is being held on a $10,000 bail and a third-party custodian is required for his release.

Willhite said he’s glad he was prepared, but also glad he didn’t have to pull the trigger.

“You carry not to hope something is going to happen, you carry because something could happen,” said Willhite, adding that it is his responsibility to protect himself and his family, not that of law enforcement.

Willhite said he did what he was trained to do, but still, the store owner called him a hero.

“I’m not a hero,” Willhite responded. “I didn’t do it for anybody else. I was there, cops weren’t.”