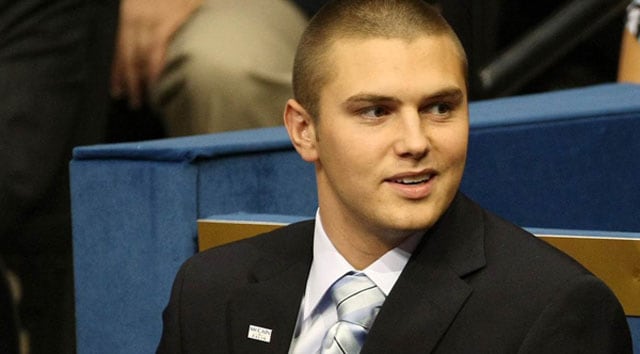 Track Palin and other members of his family were involved in a bizarre brawl in 2014 at a party in Anchorage. Reports indicate he was belligerent and uncooperative until his mother instructed him to talk to the police. (Photo: Justin Sullivan / Getty Images)

According to reports from NBC News, Palin, 26, and his girlfriend of about a year began arguing earlier in the day about the woman’s alleged contact with an ex-boyfriend. The couple was outside of the home around 10 p.m. when the argument escalated and turned violent.

Palin allegedly struck his girlfriend in the face near her left eye, knocking her to the ground before he threw her cell phone across the driveway. The woman said, not knowing what Palin was going to do next, she curled into the fetal position while still on the ground in an attempt to protect herself. At such time, Palin began kicking her, causing injury to her knee.

When Palin walked away, the woman retrieved her cell phone and ran back toward the house, where she again encountered Palin, who was this time armed with an AR-15. The woman said Palin held the rifle close to his face and asked, “Do you think I’m a p-ssy?” and “Do you think I won’t do it?”

The woman said she then ran around to the side of the house, where she lost sight of Palin, then sneaked back inside, ran upstairs and hid under a bed, where she placed a call to 911.

The responding officer noted that upon arriving at the residence, he was met by Palin in the driveway, whom he described as “uncooperative, belligerent and evasive” when initially questioned. The officer also said Palin smelled heavily of alcohol, and a breathalyzer revealed a blood alcohol level of 0.189, more than twice the level which one is considered to be “legally drunk” in the state of Alaska.

Responding officers, who found the woman still hiding under the bed and crying, noted her injuries were consistent with her account of what transpired.

Palin was arrested and charged with interfering with the report of a domestic violence, possession of a firearm while intoxicated and assault. He was released the following day after posting a $1,500 bail.

Palin’s arrest came less than 24 hours before Sarah Palin announced her endorsement for Republican Presidential hopeful Donald Trump. Charges against Palin were filed the same day as the announcement.

John Tiemessen, attorney for the Palin family, declined to comment on the incident, but did note in an email to The Associated Press that respect for the family’s privacy is appreciated while Track, an Army veteran who served in Iraq, “receives the help that he and many of our returning veterans need.”