Looking at the most popular revolvers of 100 years ago and today, it might seem like a fair criticism to say wheelgun development is at a standstill. After all, the modern revolvers like the S&W 686 share an identical manual of arms to the Hand Ejector; they’re even using the some of the cartridges. Where have all the revolver innovations been?

Well, they’ve been happening. But much like the enduring success of Browning’s short recoil action design, there’s little motivation to mess with success—both in field performance and sales. That doesn’t mean innovative concepts haven’t been applied to the revolver… just that some are more popular than others.

For this article we’ll look back at over a hundred years of revolver innovations that are not industry standards in modern guns, like stainless steel or swing-out cylinders. The designs have ranged from brilliant to bizarre. We’ll discuss their history and rate their lasting impact on gun design, as well as some speculation on potential for the future! 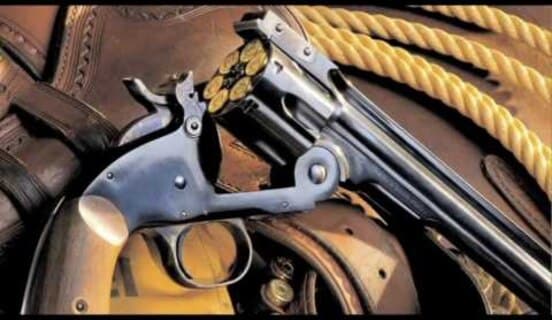 S&W Model No. 3 break top revolver. It was good enough for Roosevelt.

Competition for the then-traditional loading gate on Colt revolvers, the S&W Model No. 3 featured a new, faster way to replace spent cartridges. The No. 3 broke open at the top using a hinge at the front of the frame below the barrel. Simultaneously, the cylinder’s ejector star popped out, pushing the spent cartridges out and leaving the cylinder face open for reloading.

Because of its easy loading, the No. 3 was widely successful and inspired some later double-action designs, most notably the Webley and Enfield British service revolvers. There was even a run of DA No. 3s late in the gun’s production life. But after the World War I era, the top-break mechanism faded into history, supplanted by swing-out cylinders.

Today, the only top-break revolvers in production are replicas of the classics and rimfires. With the advent of more powerful cartridges and higher demands for durability, the top-break fell off. This is attributed to the fragility of the design; the repeated impacts from higher-pressure cartridges have potential to wear out the contact points of the mechanism, which are in more vulnerable positions than on a swing-out design. 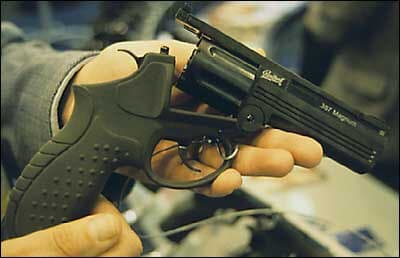 One of the two photos of the mythical REX prototype available.

Still, it wasn’t that long ago that people would have laughed at the idea at a plastic frame or reliable expanding handgun bullets. Maybe modern manufacturing could produce a top-break design capable of tolerating the repeated stresses of firing modern cartridges.

Worth noting: there’s an experimental Russian design, the REX Revolver, that was top-break .357 Magnum handgun. This fascinating oddity never saw full production. Even if it had, it’s hard to say how well it would have worked, but I would have loved the chance to try it. 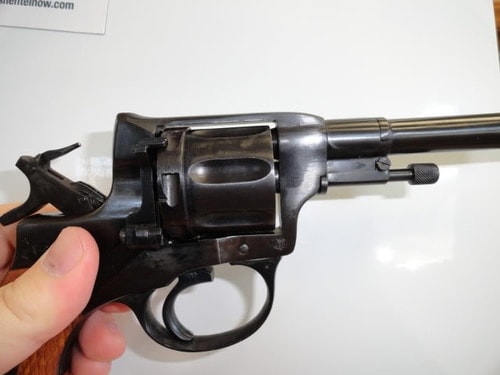 The Nagant Revolver is a beast, but can be soothed today with a suppressor.

The Nagant Revolver is a quizzical beast. It’s a double-action with a loading gate and it’s cartridge has the bullet recessed deep in the brass, but the strangest and most interesting design quirk is it’s gas-seal cylinder.

During lockup, the Nagant pushes it’s cylinder into contact with the forcing cone. This seal prevents gas from escaping the cylinder gap and improves the firearms ballistics. It has the interesting side effect of making a Nagant “silenceable”; with no cylinder gap, the noise only comes from the barrel. 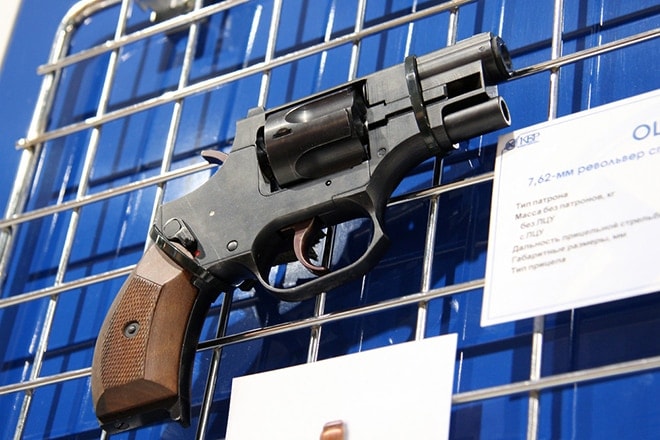 Spiritual successor to the 1895 workhorse, the OTS-38 out-weirds even the Chiappa Rhino.

The gas seal concept proved to be a nifty engineering solution to a ballistics problem more easily solved by designing better cartridges. While better ammo might have pushed the Nagant’s moving cylinder to obscurity, the idea of a suppression-ready revolver outlived it.

The specialized OTs-38 uses integrally suppressed ammunition and a cylinder contacting the forcing cone similar to the Nagant revolver to produce the same effect. While not in widespread use (or even the exact same operating principle), the concept lives on. 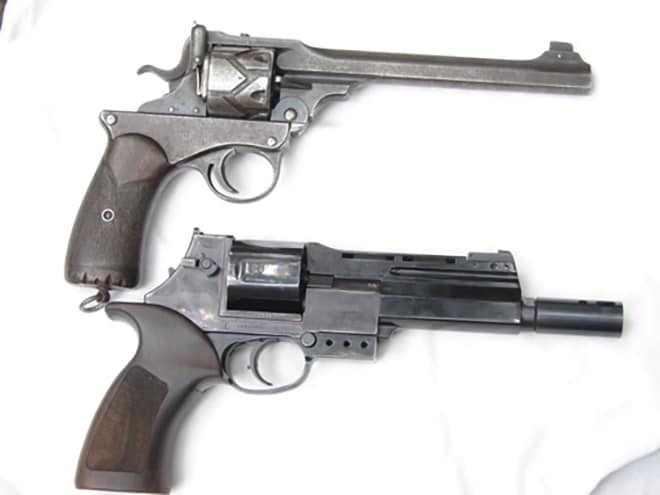 Despite the wildly divergent looks, these guns share the same fundamental concept.

One of the most radical shifts in revolver design is still one of the most unusual: the automatic revolver. Setting out to deal with the heavy double-action trigger on wheelguns, the Webley-Fosbery auto-revolver harnessed the forces of recoil to reproduce the slide-cocking mechanism of automatic handguns. The Webley-Fosbery looks bizarre over a hundred years later.

The concept was revisited by visionary Emilio Ghisoni in the 1990s with the futuristic Unica revolvers. Taking the concept and refining it, the Unicas are some of the most unique firearms of the 1900s.

For all the promise, the autorevolver never caught on. It’s understandable; you take the complexity of the automatic and marry it with the low capacity of a revolver and I’m not sure you have a recipe for success. There are no autorevolvers in current production and given the only person who tried to resurrect the concept was one of the most eccentric gun designers of the century, I wouldn’t hold my breath waiting for new ones. 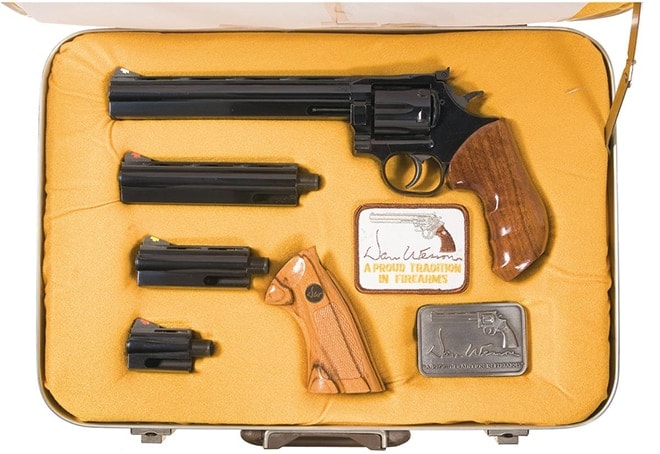 In the 1970s, Dan Wesson revolvers were shipped in “Pistol Packs” consisting of a gun and two to four barrels with lengths of 2” increments. The barrels could be interchanged using a tool that placed tension on the barrel at the muzzle and cylinder end. This tension system is credited with giving these revolvers some of their exceptional accuracy, as well as adding versatility to a single gun.

Dan Wesson revolvers are no longer sold with the interchangeable barrels. No other revolvers on the market have this feature. Despite the solid concept, the reality is this not only elevated the price of the Pistol Packs but the size of the frame never changed. A Dan Wesson M15 with a 2” barrel would never conceal as well as a J-frame, nor shoot as easily as an N-frame.

Though practical, the market seems to have spoken. Many shooters prefer multiple specialist guns to a single gun that does everything reasonably well. Still, the pistol packs fetch good prices on Gunbroker. Maybe someday we’ll see a new run of them. 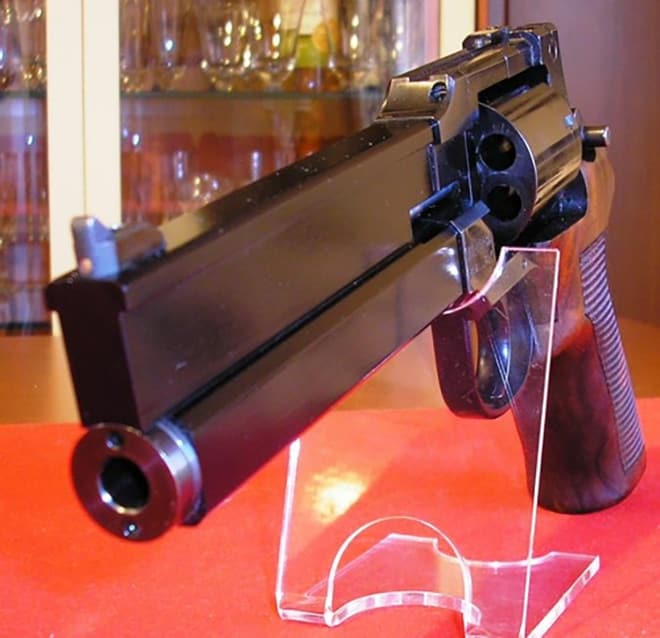 Emilio Ghisoni’s Matebas drops the barrel to align at the bottom of the cylinder.

Revolver bore axis is traditionally high on the frame because of the placement of the hammer, as well as a safety measure to distance the shooting hand from the gas escaping the cylinder gap. This contributes to felt recoil and muzzle flip, though, and combined with the stout cartridges, we get potential difficulty with follow-up shots.

Mr. Emilio Ghisoni pops up again here. With the Matebas, he flipped the script by placing the barrel of his guns aligned with the bottom cylinder. The lower bore axis changes the recoil impulse to a backwards push as opposed to an upwards jump. The result was an easier-to-manage wheelgun. 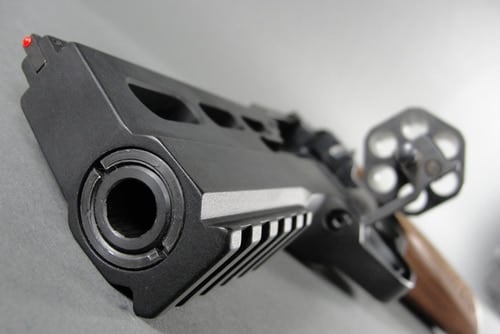 The Chiappa Rhino, also designed by Ghirsoni, carries this design element to the modern day. There’s little question that the bottom-aligned barrels works in reducing muzzle flip. I don’t expect to see waves of bottom-barrel revolvers released by traditionalist companies like Smith and Wesson, but I wouldn’t be surprised to see more being released on an experimental basis to test the market.

Will we ever see bottom-cylinder alignment as a standard on revolvers? Unlikely, as a lot of the appeal of wheelguns in the first place is nostalgic. But there is always market space for something different.

The “different length, same diameter” type of multi-cartridge revolver has been around since the early 1900s. But in the late 90s Jonathan Phillips (NASA engineer) brought something new to the table: the Medusa Model 47’s cylinder design. Built with a ‘claw’ extractor that could accommodate rimmed, rimless or rebated cartridges alike without a moonclip, the Medusa 47 could fire almost any handgun round with a bullet diameter between .355 and .357.  Sold by the now-defunct Phillips and Rodgers company, the design was timely as wild speculation over the Y2K began to drive profits in any product that could be considered a survivalist’s tool.

Phillips and Rodgers is out of business. The Medusa 47 was produced and sold in small quantities, but demand was surprisingly limited—especially after the Y2K bust. While Colt, Taurus and S&W all either prototyped or produced wheelguns with similar mechanisms at some point, this feature never made a major splash. While it’s an interesting novelty, practical applications seem a bit limited, especially considering the tradeoff in the mechanical complexity of the cylinder and ejector when compared to a typical revolver. 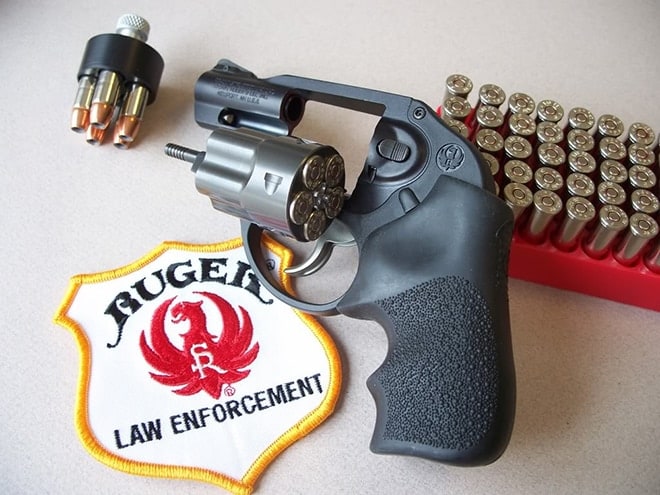 Snub nosed revolvers for CCW are all the rage now, largely because of polymer.

After Glock showed the world the benefits of polymer framed firearms, it took the wheelgun a few years to catch the plastic craze. But it happened eventually, with the Ruger LCR and S&W Bodyguard leading the charge in lightweight polymer revolvers.

Ideal for CCW guns, polymer construction reduces the firearm’s weight and resists corrosion that constant contact with the carrier produces. These guns have proven exceedingly popular and are well-received by gun owners, self-defense enthusiasts and recreational shooters alike.

The future looks bright for black plastic. Strong reviews and sales usually translate into a prolonged production run. Given the proof of concept these little guns provide, we might even seen service-sized revolvers with polymer frames someday (like the aforementioned REX?), though the main appeal of the polymer frame is weight reduction and that’s mostly a CCW feature.

Even if we only see polymer revolvers designed for carry in the future, I think it’s safe to say this innovation has long-term legs.