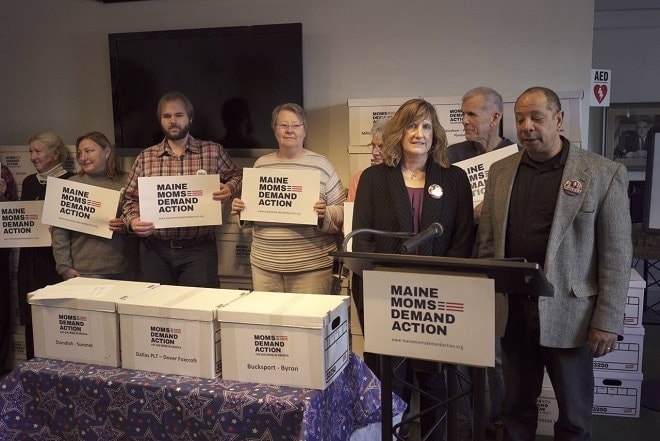 A gun control group bankrolled by former New York Mayor Michael Bloomberg coughed up over 80,000 signatures, though they may have paid upwards of $1 million to a professional canvasser to get them. (Photo: Moms Demand Action)

This week Moms Demand Action brought boxes of signatures garnered from across Maine to the Secretary of State’s office in an effort to qualify their initiative for the November ballot.

Filed with the office last August, the effort would add a voter referendum to the upcoming that would mandate Brady checks on most gun transfers. The Maine secretary of state gave the go ahead for the group to start collecting signatures in October.

The Maine initiative must gather 61,123 valid signatures by Jan. 22 to qualify, and MDA feels they have far surpassed that goal, dropping off 85,436 signatures collected from every county and city in the state.

“Over the past three months, more than 200 volunteers have poured their hearts into this effort, and I could not be more proud,” said Jackie Sartoris, with the group’s Maine chapter. “But our work has only just begun. Now that we have submitted these thousands of signatures to the Secretary of State’s office, we begin in earnest our campaign to strengthen our gun laws and save lives. Over the next nine months, volunteers from every corner of Maine will work tirelessly to pass this referendum.”

However, the volunteers alluded to by Sartois may have been ringers.

According to paperwork filed with election officials, Fieldworks, a professional canvassing organization based in Washington D.C., hired some 200 individuals for the purpose of circulating petitions for signatures. The company specializes in Democratic party campaigns and includes Hillary Clinton for President and the AFL-CIO on its list of clients.

Since late October, when the petition process was green-lighted to proceed, Fieldworks has been seeking employees in Maine to help “improve public safety” promising up to $625 a week for their efforts. This alludes to an expenditure of as much as $1.1 million from the Bloomberg group to produce the mountain of petitions delivered this week.

The language is very similar to the proposed ballot measure in Nevada backed by the group and follows in the wake of a successful push in Washington in which the Everytown for Gun Safety Action Fund, allied to MDA, chipped in $4 million to help win voters in that state in 2014. Fieldworks lists the Washington Ballot Initiative Network as a past client.

Citing a phone survey of 400 likely voters in Maine paid for last August by the Bloomberg-funded group, MDA contends 80 percent of Mainers support background checks for all gun sales.

National gun rights groups as well as Gun Owners of Maine and the Sportsman’s Alliance of Maine oppose the ballot measure.

Update 2/19/2015: The Portland Press Herald verified in a January 24 article that Maine Moms Demand Action for Gun Sense received $750,000 from Everytown for Gun Safety and paid FieldWorks LLC more than $570,000 between Sept. 1 and Dec. 31, 2015, citing MDA used both volunteer and paid signature gatherers in their effort.