Rifle from El Chapo's hideout linked to 'Fast and Furious' 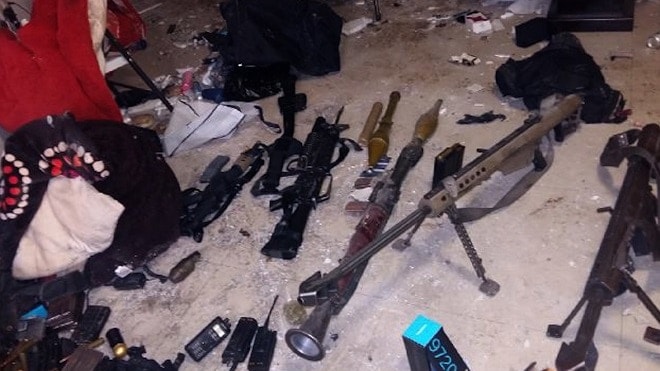 Three .50 caliber rifles were captured along with El Chapo, and it seems that at least one has ties to the U.S. through the Fast and Furious program. (Photo: Secretaria de Marina)

Reports from Arizona link several of the firearms seized from the hotel hideaway of notorious narco Joaquin “El Chapo” Guzman to that state including one sold under the ATF’s gun walking fiasco.

Guzman, on the run since his dramatic escape from prison through a secret tunnel last year, was captured after an intense gunfight between his cartel bodyguards and Mexican Marines at a motel in the Sierra Madre town of Los Mochis, Sinaloa on Jan. 8. When the smoke cleared, five of the drug lord’s men were dead and government officials showed off a cache of weapons to include three .50 caliber long-range rifles, grenade launchers and an RPG.

Now it appears that at least one of the .50 cals could have found its way to the Hotel Doux shootout through a failed federal operation ran by the Arizona Field Office of the Bureau of Alcohol, Tobacco, Firearms and Explosives for between 2006 and 2011.

Known as Operation Fast and Furious, the program allowed licensed gun dealers to sell firearms to believed straw buyers in hopes of tracking the guns to Mexican cartels across the border. However, the agency lost track of most of the guns under scrutiny.

Source tracing has confirmed that five of the weapons captured along with Guzman originated in Arizona with one of the three .50 cals being tied to Fast and Furious, as reported by the Arizona Republic. The paper lists unnamed sources close to the investigation.

Tracing is not complete on the other two large caliber rifles.

As noted by Fox News, of the 2,000 guns estimated to be sold under the gun walking program, no less than 34 were .50 caliber rifles. Guzman in particular was a fan of using such guns in his operational security, posting snipers on hilltops in an effort to take shots at Mexican military and police helicopters, using the large bore rifles in an anti-material role.

Guns.com reached out to the ATF for confirmation on the rifle’s pedigree. If confirmed it would not be the first time that a Fast and Furious gun was recovered from crime scenes.

In 2010, Border Patrol Agent Brian Terry was killed in a shootout near the Mexican border and the guns recovered tied to the program.

A report issued this month by the U.S. Government Accountability Office contends over two-thirds of the guns given by Mexican authorities to the Bureau of Alcohol Tobacco Firearms and Explosives to trace in recent years originated in the U.S.