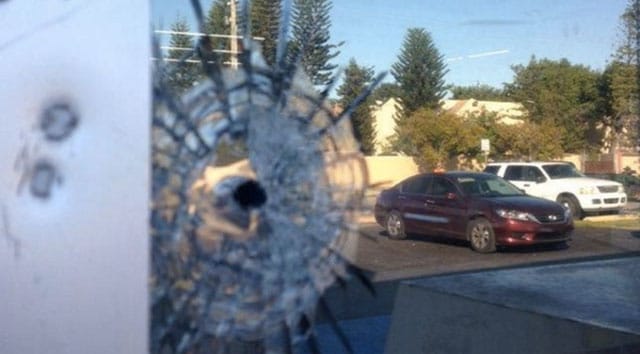 The attempted robbery left a bullet hole in the window and a dead robber lying on the floor. (Photo: Anne Geggis / Sun Sentinel)

An attempted robbery at a Deerfield Beach, Florida, convenience store Friday evening was thwarted by, not one, but two clerks who fired back at the suspect, and the store owner, who lauded their actions, says he has no qualms about having half a dozen guns stashed in his business.

It was around 7:40 p.m. when two employees at Snappy Convenience Store were helping a customer and a man wearing a mask, gloves and carrying a gun, stormed in and demanded money.

Store clerk Hamam Al-Fala, 24, said he didn’t even get a chance to comply with the robber’s demands before the bullets started flying. In fact, a bullet from the suspect’s gun narrowly missed Al-Fala, but punctured a window that was behind him.

“The only thing I thought of was my son. It was scary,” Leon told a local ABC affiliate .

But the clerks prevailed, striking the suspect several times before he collapsed in the store. When Broward County sheriff’s deputies arrived on the scene,  the suspect was pronounced dead. He was later identified as Raymond Prescott, a man who had a criminal history for trafficking drugs and was on probation at the time of the attempted robbery.

Al-Fala, who was so distraught over the incident he had to receive oxygen when first responders arrived, said he is still shaken up over the ordeal, but did what he had to in order to protect himself.

Samar Al-Madi, the store’s owner and Al-Fala’s uncle, shot a robber in the face at the same store in March 2010. The suspect, Alexander Brown, survived the blast, but is now serving 30 years in a state prison.

Al-Madi, who admitted he keeps about six guns in the store at all times, was taken aback when reporters with the Sun-Sentinel suggested he change locations.

“We’ll stay here forever,” Al-Madi said with certainty as he dropped his fist to the counter. “We’re just trying to make a living.”