A marksman's rifle donated for war, sent back in peace 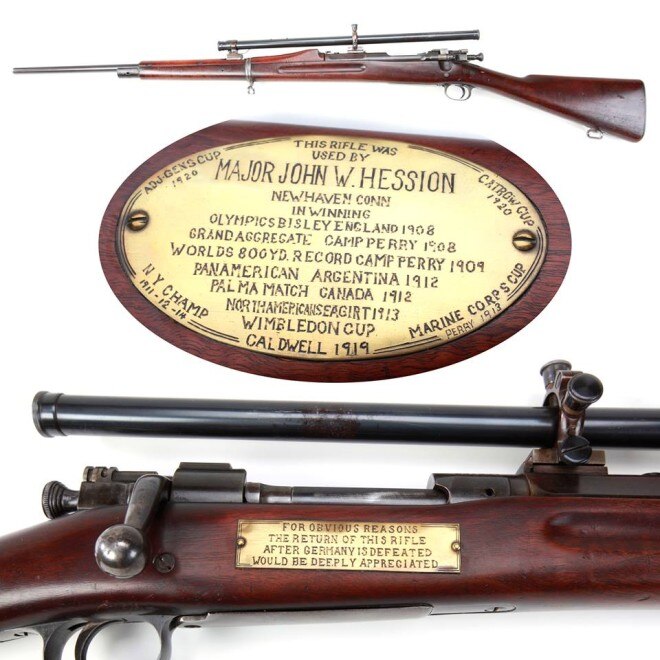 Maj. Hession’s rifle served him well in competition for over 30 years, then was loaned to the British to help Londoners from learning German in WWII. (Photo: National Firearms Museum)

Major John W. Hession was a rock star of the shooting world in the 1900s but when Britain needed rifles in World War II, he sent his very best, only asking it be returned after things quieted down.

Hession, born in 1877, was a U.S. Army ordnance officer assigned to inspect weapons for the military. Besides his day job, he was a master long-range and small bore sharpshooter who competed in the 1908 London Olympics, set a world record for an 800 yard shot at Camp Perry the next year by shooting 57 consecutive bullseyes (that’s fifty-seven), winning the Marine Corps Cup in 1913, picking up the Wimbledon Cup in 1919 and 1932, and so on and so forth.

In all, he participated in 500 major competitions in the course of his life and is remembered as an excellent marksman to this day.

Well in 1940, with the British Army losing most of its equipment in the evacuation from Dunkirk, an urgent call was sent out for arms to equip the new Home Guard being prepared to resist a German invasion. With that, in November 1940 the National Rifle Association’s American Rifleman magazine ran an ad placed by the American Committee for the Defense of British Homes asking for guns to be donated as often and as soon as possible.

And in response, Hession sent his match-grade M1903 Springfield. Built in 1905, the bolt-action .30-06 had a 30-inch barrel and Stevens scope installed. A trophy and veteran rifle that had served him well, it was adorned with brass plates denoting its use in dozens of competitions.

Before it shipped to the UK along with over 7,000 other weapons collected, Hession added one more plate, one that simply read, “For obvious reasons the return of this rifle after Germany is defeated would be deeply appreciated.”

Hession himself, then in his 60s and retired from active duty, remained at his civilian job at Winchester and helped the war effort from there.

Sometime after Hitler was crushed the Hession rifle did come back home.

While the great rifleman passed in 1961, novelist Robert A. Heinlein, famous for Starship Troopers, later picked up the gun and even mentioned a similar ‘1903 in his work, Number of the Beast and it eventually ended up in the National Firearms Museum where it rests today.