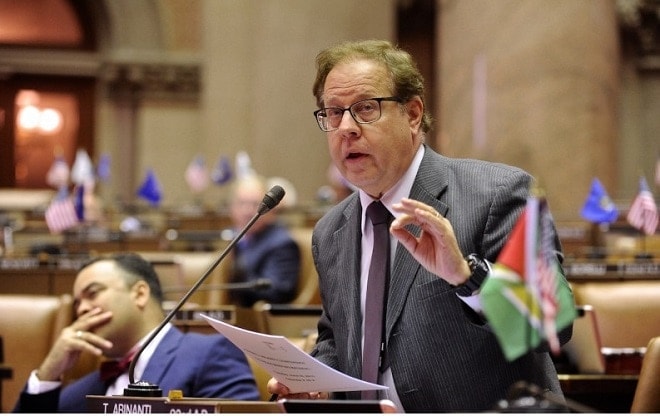 New York Assemblyman Tom Abinanti and other state Democrats feel those who find themselves on the no-fly list should find themselves without guns. (Photo: Patch New York)

A set of companion measures introduced in the state legislature would ban those whose name appears on the terror watch lists from having a New York firearms permit.

The proposals, one in each chamber, would affect both renewals of existing permits and processing of new ones if the applicant is on the list maintained by the Terrorist Screening Center within the Federal Bureau of Investigation.

“If you’re not safe to fly, you’re not safe to have a gun – its common sense,” said sponsor Assemblyman Tom Abinanti, D, Greenburgh, in a statement. “This ‘terror gap’ poses a direct threat to the safety and security of all New Yorkers.”

Abinanti proposal, A.8693, requires those being vetted for a permit in the Empire State first have their identities checked against the combined terror watch list as part of their background check for a license to carry, possess or repair firearms. As a permit is required to own many types of guns in the state, should a renewal be refused this would force a gun owner to relinquish their arms.

In neighboring Connecticut, Gov. Dannel P. Malloy promised an executive order last month banning the sale of firearms in the state to those on government watch lists.

National and local gun rights groups warned of possible litigation against both Malloy and the federal government should the action move forward, citing the order would be a clear “due process” violation of the 14th Amendment to the U.S. Constitution. Nonetheless, this has not stopped lawmakers in other parts of the country from calling for action on similar plans.

Inside New York, state Sen. Rob Ortt, R, North Tonawanda, has joined with the regional gun rights group Shooters Committee on Political Education to decry the use of the no-fly list in making decisions about lawful firearms possession.

“Citizens have no notice and limited recourse if they are improperly placed on the list,” said Ortt in a joint statement. “It’s annoying to be told you’re unable to enter an aircraft because your name is on a federal no-fly list managed by Washington bureaucrats; and it appears unconstitutional for state police to show up at your house to confiscate your weapons because your name appears on such list.”

Introduced earlier this month, both bills have been referred to their respective Codes committees.