2 CWP holders fire back during armed robbery at SC barbershop 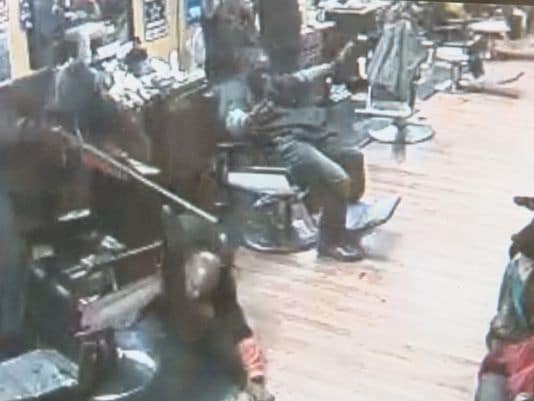 Less than 24 hours after the robbery and shooting, the shop was back open for business and packed with a full house. (Photo: WLTX)

A robbery at a barbershop in Columbia, South Carolina, on Friday night didn’t go as planned after the two suspects discovered one of the barbers and his client were both armed with guns of their own.

It was about 7 p.m. and Next Up Barber & Beauty had about 20 people inside, including several small children, when the two suspects walked in with their faces covered. One was armed with a pistol, while the other had a shotgun, and both began demanding money from employees and customers alike.

“The kids were crying, hollering, and their parents were hollering,” Elmurray “Billy” Bookman, whose barber chair sits two down from the door, told The State after the incident.

Bookman said he believed the robbers were growing increasingly frustrated. “They started putting their hands on some of the customers,” he said.

Bookman said the suspects were forcing customers to the ground and taking money from everyone’s pockets and out of the jackets of his fellow barbers. But when the suspect with the pistol got to Bookman’s client and demanded his money, the man told them his cash was in his coat pocket on the chair by the wall across from him. The suspect then turned toward the chair, and at that point the customer pulled out a pistol and shot the suspect.

Bookman, who was also armed with a handgun, said at that moment all he thought about was protecting the people inside the barber shop, and he too grabbed his gun and opened fire on the suspects.

As soon as the gunfire erupted, the suspects desperately tried to flee from the building, running toward the back door to make their escape. However, the door jammed and Bookman and his client continued to fire at the suspects, striking the one with the pistol again before they eventually got out.

When officers arrived, they found the suspect with the pistol nearby. He was transported to the hospital where he was later pronounced dead. The suspect’s name has not been released, pending notification of the next of kin. Police aren’t sure if the second suspect was injured, but he remains at large.

According to a release from the Columbia Police Department, the pistol used by the suspect was stolen from a South Columbia home back in 2012. Police also confirmed Bookman and his client both posses a valid concealed weapons permit.

None of the employees or the customers at the barber shop were injured, but Bookman said he’s concerned about the children who had to witness the ordeal.