Arizona proposal would give tax credit for concealed carry 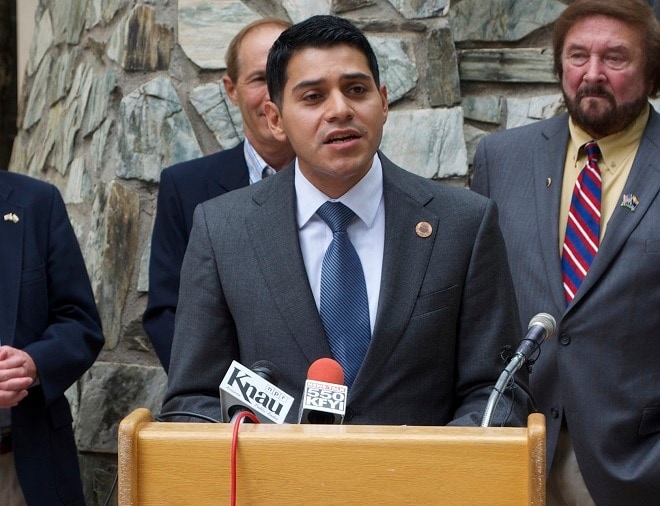 The second most powerful Republican in the Arizona House, Rep. Steve Montenegro, feels the tax credit would result in more permitted and trained concealed carriers in the state. (Photo: Capitol Media Services)

A bill sponsored by the state House Majority Leader could see an offset for Arizonians who obtain a concealed carry permit.

The measure would offer a tax credit of up to $80 towards the cost of a permit and training in the state. The Arizona Department of Public Safety currently charges $60 for new permits and $43 for renewals while training costs vary.

“Law enforcement have told us time and again that the first line of defense are those that carry CCW permits,” Rep. Steve Montenegro, R-Avondale, said. “In essence, what it does is it’s bringing a level of awareness that we want to make sure that we can say maybe the next generation of those that want to have or possess firearms, they understand that we as a state value making sure that people are educated in how to use weapons or how to carry weapons.”

Montenegro’s bill, HB 2494, would allow those who successfully pursue and obtain a permit to seek the credit of up to $80 against their state income tax. Those who fail to qualify or are denied a permit would be ineligible. The credit could rollover for as many as five years should the taxpayer owe less than the offset amount in taxes.

Arizona is a “constitutional carry” jurisdiction that allows those able to legally possess a handgun to carry one concealed without a permit. However, the state has long granted permits to those who apply through a lenient shall-issue system that, since 2011, has not mandated a training requirement.

According to state police statistics, there are currently over 251,000 permits active in the state with the largest demographics – almost one in five – being issued to males aged 60-69.

Some think the offset could translate into more people seeking firearms classes, which they contend could be invaluable.

“There are a lot of people carrying weapons that no longer have the training,” Jeff Prather, founder of Warrior School, LLC, told KVOA. “They do not know how to clear them, they don’t know how to make them safe, all they’ve done is plinked at some cans or shot some targets and then they think that they are ready to defend themselves.”

Not all are enamored with the proposal. Citing concerns over taxpayers underwriting the cost of training and permitting Laurie Roberts with the Arizona Republic slammed the offset in an opinion piece as, “welfare for gun owners.”