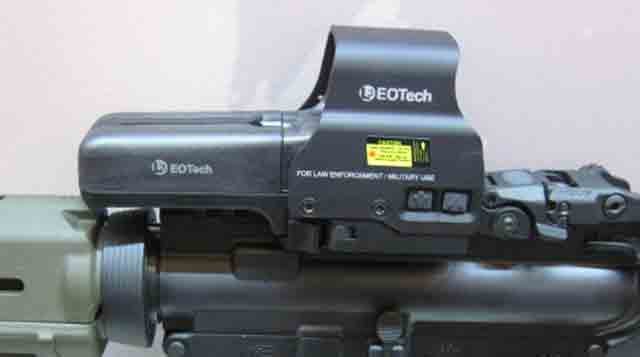 An EOTech scope on display at SHOT Show in Las Vegas. (Photo: All Out Door)

EOTech takes to offense at a trade show last week, talking about repairing customer relations after settling a fraud case over defective optics.

In response to questions about the damage, the company’s director of marketing, John Bailey, discussed specific challenges and possible solutions with outdoor media at 2016’s Shooting Hunting Outdoor Trade Show in Las Vegas.

“We are trying to make people whole and make sure that they are satisfied with their product,” Bailey told Military.com and described a “positive outlook” for restoring public trust.

In November, L-3 Communications Corp., the New York company that owns EOTech, settled a $25.6 million lawsuit hours after it was filed by the Justice Department.

The lawsuit alleged EOTech had knowingly sold defective holographic weapons sights to the Department of Defense, Department of Homeland Security, and the Federal Bureau of Investigation. The fraud charges date back to 2004, when EOTech won multi-million dollar contracts with various government agencies.

With regard to civilian customers, the EOTech official said the company is offering to fix the defect.

EOTech’s website hosts a letter to customers informing them of the problems for specific products and ways they can obtain a refund.

Update: We misstated the defective product when the article published. It has been corrected.