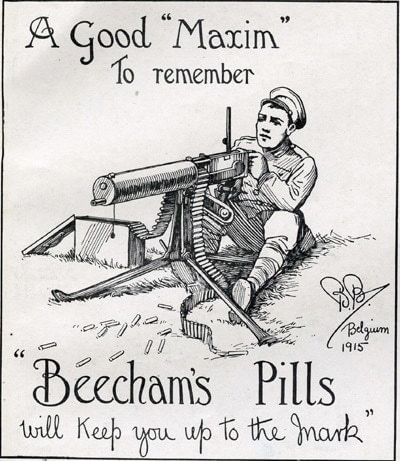 A sketch of a British soldier at a maxim machine gun used in an ad to sell medicinal products. (Photo: Brown University Library)

The name shared by a gun company and a popular new pistol is the subject of a legal dispute that could result in the cancellation of a registered trademark.

A Minnesota federal court is hearing a case that seeks to determine the legal use of the trademarked name “Maxim,” historically known in the firearm industry as the surname of the creator of silencers.

Maxim Defense Industries, shortened to MGW, filed a suit preemptively against SilencerCo in October, just 10-days after the Utah silencer-maker threatened to take legal action if the company continued to use the name. Last week, MGW amended its complaint after SilencerCo submitted a counterclaim.

In the amended complaint, MGW is asking the court to cancel the registered trademark “Maxim” because the company that previously owned it went out of business and therefore abandoned ownership, and later fraudulently renewed ownership.

According to court documents, SilencerCo bought the trademark in December 2014 from the now defunct U.S. Fire Arms. Last September, SilencerCo used the trademark to name an integrally suppressed pistol, the Maxim 9. Although the handgun is comprised of a SilencerCo suppressor and Smith & Wesson M&P pistol, SilencerCo announced plans last week to manufacture the design in house.

The lawsuit says USFA, a Connecticut-based company, went out of business in 2011 and then assigned the trademark to the Wyoming-based ZiP Factory LLC in April 2014. A business entity search displays the full name of the company as USFA/ZiP Factory.

However, the lawsuit alleges ZiP, in order to renew registration of the trademark, altered a document submitted to the U.S. Patent and Trademark Office to show continuous use of the trademark on silencers and that the mark was still in use in commerce.

USFA/ZiP submitted a downloaded copy of an Amazon.com webpage of the product page for a “ZiP MAXIM Supp. Upgrade Kit.” The lawsuit alleges that copy had been altered and pointed to signs of photoshopping.

Also, the lawsuit says in order to violate the trademark MGW must be in the business of silencers, which it only makes guns and gun components.

According to the trademark’s registration page on USPTO, “Maxim” was intended to be used with “silencers for firearms” when it was published in 2007. It’s been in use and in commerce since February 2008.

In addition to cancellation of the trademark, for an award, MGW is asking the court to declare that its use of its logo and assumed business name does not cause trademark infringement, and any relief deemed just and proper.