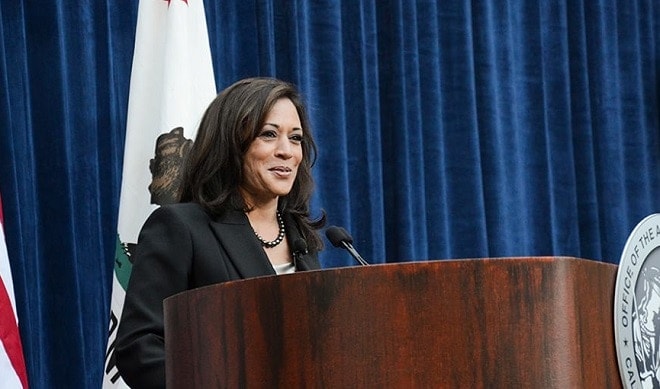 Despite a $24 million windfall derived from gun owner fees, the state’s gun confiscation program still has over 12,000 individuals on its list waiting to be investigated. (Photo: Kamala Harris for Senate)

Attorney General Kamala Harris advised lawmakers the unique program to collect registered firearms in the state from those no longer eligible to possess them is still suffering a huge backlog.

California State Department of Justice’s nine year old Armed and Prohibited Persons System, which uses lists of firearms owners cross-referenced with criminal and mental health records to identify once-legal gun owners who may be in possession of weapons in violation of state law, was given a $24 million boost in 2013 by state lawmakers. The money, drawn from state fees on gun sales, was to eliminate the massive backlog of over 20,000 persons believed to be armed with 40,670 firearms.

Now three years later, Harris reports the program has only whittled the list down by about 40 percent, with some 12,691 individuals still in the database whose cases have not been investigated. While the figures are at the lowest since the start of the program, and some 9,700 guns have been impounded – including 541 from one individual who is promising a lawsuit – APPS is still struggling to keep up with its work.

The answer, contends Harris, is more money despite a more than $2 million surplus from DROS fees. She points to further shortfalls in staffing, with nearly one in three agent positions vacant, and new laws such as the state’s gun violence restraining order process as reasons for the continuation in extra funding.

“Due to subsequent changes in law that will substantially increase the number of prohibited persons and the real and present danger these individuals pose to public safety, I strongly urge you to make permanent the increased APPS funding you approved three years ago,” wrote Harris to legislators last week seeking an extension of the increased funding, currently set to expire in five months.

Last November, Harris held up the APPS program’s successes, stating at the time the unit has doubled the average number of guns seized per year and increased investigations per month threefold. At the time the backlog stood at 13,918 and pointed out the figure was then at an all-time low. This followed criticism from Republicans in the state Senate who asked Harris to be called on the carpet when reports that the DOJ had hired 18 additional agents and spent millions but had little to show for its work .

This time around, GOP lawmakers remain less than enthused and cite that Harris, who is running for a place in the U.S. Senate, is putting a spin on the sputtering program.

“She’s taking a victory lap and she should be holding her head in shame,” Sen. Joel Anderson, R-Alpine, said Monday. “They seem to think it’s a good thing and I think it’s outrageous.”

Meanwhile, Democrats in the Senate are defending the program, citing it shows signs of improvement.

“That is certainly a return on investment,” said Sen. Mark Leno, D-San Francisco. “We should not turn our backs on that progress.”