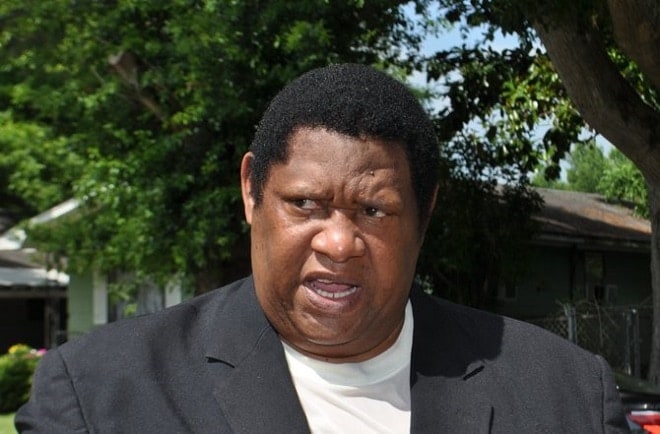 After a series of tongue-in-cheek signs at a Mississippi gun show refusing to sell firearms to Democrats or terrorists went viral, a controversial Jackson councilman has contacted the feds.

Kenny Stokes, who is on his seventh term as a Jackson city councilman, on Jan. 20 wrote to the office of U.S. Attorney Gen. Loretta Lynch asking the Justice Department to look into a series of signs posted at an area gun show which took jabs at both Stokes and President Obama directly, as well as one reading, “We don’t sell guns to terrorists or Democrats! It’s too hard to the tell the difference!”

While the creator of the signs, area gun shop owner Tim Wolverton, said he made them as a joke, Stokes isn’t laughing.

“Of concern is the unlawful nature of the occurrence of a gun dealer displaying signs depicting the President of the United States and a Jackson City Council Member and threatening to deny the sale of guns to certain individuals because of those depicted,” wrote Stokes in his letter.

The signage, contends the lawmaker, stems from continuing backlash from earlier in the month when Stokes came under fire over his protests of police from neighboring cities chasing misdemeanor suspects into Jackson. At the time, Stokes argued, “What I suggest is we get the black leadership together, and as these jurisdictions come into Jackson we throw rocks and brick and bottles at them.”

This led to Republican Gov. Phil Bryant and state Attorney Gen. Jim Hood blasting the councilman’s remarks while the rest of the City Council quickly distanced themselves from Stokes, clarifying he did not speak for the majority or the city itself.

Wolverton’s shop, Downrange Sporting Goods, which opened in 2014 and is the only gun store in downtown Jackson, has seen a number of supportive comments posted to its social media page. He agrees the signs were a product of the councilman’s brick and bottle comments.

“It was out of the total lack of respect for our law enforcement from Kenneth Stokes,” Wolverton told WJTV.

“I just kind of did it as a joke thinking I would get a little humor out of it and maybe aggravate him and a few other people,” Wolverton said.

Guns.com reached out to both Stokes and Wolverton for further comment and will update this post should one be received.