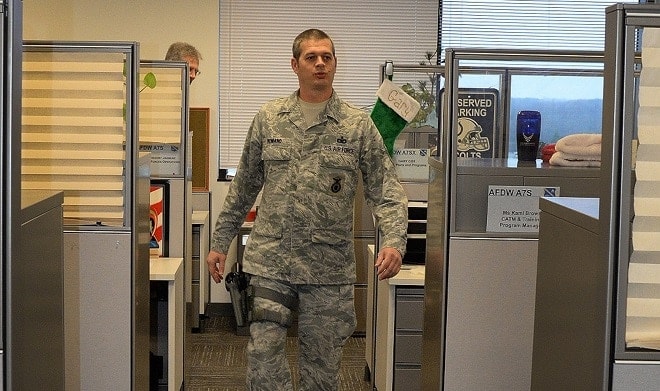 Under three programs recently green-lighted, base commanders will have the ability to allow more personnel on base to carry in the interests of saving lives in an attack. (Photo: U.S. Air Force /1st Lt. Esther Willett)

Last week the U.S. Air Force issued guidance to base commanders that will lead to more guns in the hands of more current and former service members on base.

Under the new measures, as outlined in a Jan. 20 release from the service, base commanders are free to utilize three different programs to suit their own unique needs with the end-goal of saving lives in the event of a mass shooting.

“We looked at active-shooter incidents across the country and there are statistics out there that show where many ended without police intervention because there was somebody there who had a concealed carry permit or somebody interdicted the active shooter,” said Maj. Keith Quick. “These programs allow commanders the ability to arm additional trained Airmen who could interdict before police arrive and are trained to stand down when police arrive.”

The three programs, Unit Marshal, Security Forces Staff Arming and Law Enforcement Officer Safety Act have a narrow scope each relying on military personnel who are pre-approved and given special training.

The Unit Marshal Program, new to the Air Force, would take selected Airmen from non-security related units, provide them with additional use of force and weapons training, then issue them a M9 Beretta to carry openly while on duty. This will place armed service members in remote base areas where they would be immediately available to react to an incident in self-defense without having to wait for security forces. As such, they will have strict rules of engagement.

“The goal of the UMP is to protect them, their immediate work space and the people within it,” Quick explained. “They are not first responders, they are not to go to the sound of fire, they are not to chase bad guys. If an active shooter happened, these members are not authorized to engage unless confronted directly by the active shooter.”

The Security Forces Staff Arming initiative, already set up in the Air Force District of Washington among others, allows staff members at the squadron, wing and command levels with a background in Security Forces – the branch’s military police – to be armed while on the job.

“Staff arming is a force multiplier initiative that embeds security threat mitigation throughout the Air Force by providing a rapid and thoroughly trained counter-threat response,” said Master Sgt. Chris Romano, AFDW Security Forces Plans and Programs Branch superintendent. “If one life is spared due to a quick and decisive internal response, the means will be justified.”

The third program, the Law Enforcement Officer Safety Act, has been long-standing but was modified by language hidden in the 2013 National Defense Authorization Act to grant active and retired military police and law enforcement officers with UCMJ apprehension authority to qualify for the statute and allow them to carry concealed firearms nationwide regardless of state or local laws.

The key to this is that it allows not only active duty but also reserve and retired personnel coming on base with LEOSA credentials to carry a personal concealed weapon – provided the base commander is open to the idea.

“With installation commander’s approval, I could go to the commissary on Saturday and stay armed and concealed while conducting my business on the installation and leave … it’s not for work purposes,” said Quick.

In the end, the Air Force feels it is all about saving lives in a world where base shootings are a reality and personnel are training in active shooter drills based on responding to similar models.

“There have been numerous scenarios on active duty bases to include the Navy Yard shooting and most recently the Chattanooga shooting,” said Mr. Mark Allen, Security Forces director for the Air Force District of Washington. “Each gave additional emphasis on physical security, arming and emergency warning notification.”