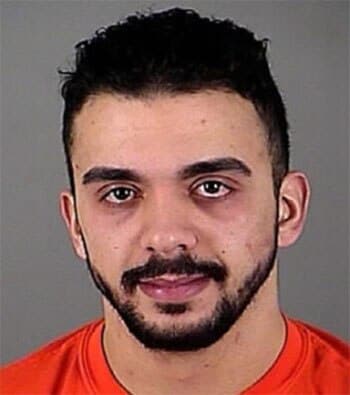 Samy Mohamed Hamzeh could face up to 10 years in prison, if convicted. (Photo: FBI)

A 23-year-old Milwaukee man is facing federal charges for possessing multiple machine guns and a silencer, which he planned to use during a terrorist attack on U.S. soil, the Federal Bureau of Investigation announced Tuesday.

Samy Mohamed Hamzeh became the subject of an investigation in September. Authorities learned he originally had plans to go to Jordan in October and carry out an attack on Israeli soldiers in the West Bank. However, before Hamzeh went through with those plans, he nixed the idea and instead decided to focus on an attack in the United States.

During the course of the investigation, authorities learned Hamzeh conducted extensive conversations with at least two sources detailing plans to carry out an attack, and decided on a Masonic temple as the target earlier this month. Soon thereafter, Hamzeh and the two sources toured the temple and gathered information on meeting times and who would be located where during those meetings. Following the tour, Hamzeh again confirmed his unscrupulous intentions.

“We want two machine guns, you now have one, so we want two more, and we need three silencers, that’s it,” Hamzeh said in a conversation with the sources. “Find out how much all together these will cost, and then we will march.”

Hamzeh explained that to go without a silencer, “you will be exposed from the beginning.” He further detailed the plans and how the trio wold manage to “annihilate everyone,” then make their escape.

Hamzeh then went on to showcase his motivation for the attack. “I am telling you, if this hit is executed, it will be known all over the world,” he told the sources, according to the release. “Sure, all over the world, all the Mujahedeen [Jihad] will be talking and they will be proud of us.”

Hamzeh also spoke of his attack “igniting” other, similar attacks.

Hamzeh then made plans to buy two machine guns and silencers from individuals whom he did not know were undercover FBI agents. After the purchase was completed, on Jan. 25, Hamzeh was arrested.

Special Agent in Charge of the FBI Robert J. Shields confirmed that “at no time was the public’s safety placed in jeopardy” during the investigation and purchase of the guns.