OATH Ammunition has created a 12 gauge hollowpoint-like round. They call it a fragmenting slug.

There is some emphasis on expansion, which is what interests me when it comes to defense rounds, but from what I’ve seen of the design, the projectiles almost seem to open, split and then fragment.  I am of the informed opinion that fragmenting ammo, like the G2R RIP ammo, is not really all it’s cracked up to be and, after reviewing several claims in the company write up, I am skeptical that this ammo will work any better than what is already out there to stop people in a gunfight.  Here’s why:

Brass case on OATH ammunition round will raise the price. (Photo: Alloutdoor.com)

The reason I predict this round is going to end up being too expensive for law enforcement or many civilian shooters is the brass case. But further, I can foresee the brass leading to feeding and extraction problems.

It may be a case of the ammo getting along fine loading pump actions, but not necessarily loading semis.  Contrary to this, I’ve heard people claim that brass ammo loads better in Saigas. (Little do they know that many if not most of the feeding problems with Saigas come from poor American made magazines paired with Russian made shotguns.)

More so, however, I can see the brass casing contributing to extracting problems. The Remington 870, for instance, has a single extractor, while Mossberg has a double extractor. Though it may take a while for it to show itself, I think there could be problems with single extractor guns using this ammo. 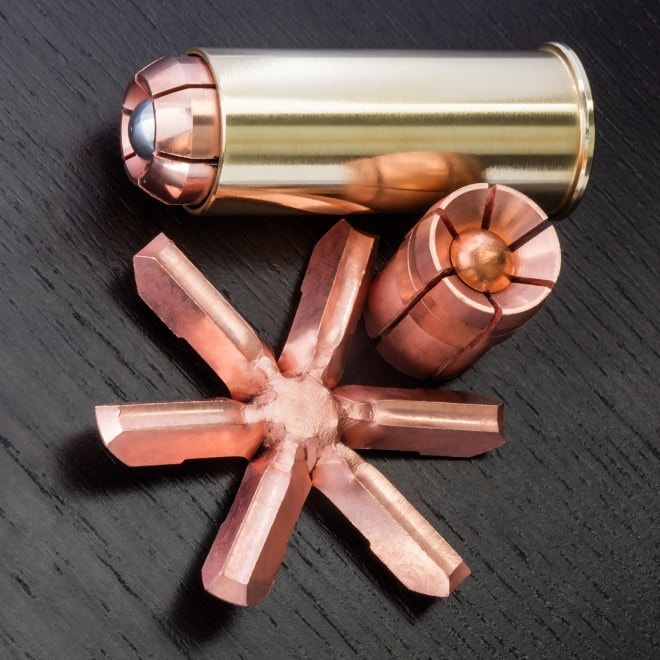 As far as the effectiveness of the actual round goes, OATH ammunition claims that other 12 gauge rounds over penetrate in hominids. In my real world experience, penetration and wound cavitation is what stops threats, yet this is what OATH ammo claims of their rounds ballistic performance: “Penetration is likewise limited to the depth of a rib cage, producing very good stopping effect without over penetration.”

What?! All that says to me is that you can shoot someone and they won’t necessarily stop attacking or shooting at you!  You must get deeper penetration than just the rib cage; it’s silly to think that any gun that cannot penetrate more than an inch will do any good in a gunfight.

I don’t think I need an OATH Ammunition mutilator at this point. But time will tell. (Photo: Alloutdoor.com)

As to the viability of this product, frankly, I’m not sure what to think yet. On the one hand, the promise of maximum damage while avoiding over penetration does sound great—forward thinking even, which is something I value when it comes to guns and ammo.  But on the other hand, this new, cool looking, not-at-all-vetted-yet 12 gauge round sounds way too expensive and it doesn’t emphasize the features I demand in a shotgun slug.

For now, I’m still banking on 00 or 000 buck shot within 7 yards and 12 gauge slug rounds for 50 yards and closer. Smashing a 12 gauge slug into human flesh will certainly penetrate more than an inch.  It will damage soft tissue and destroy bone too.

Whenever a new product hits the market, it’s always important to wait a while until that product has been fully tested by the market. For instance, as much as I like these two guns, they had hiccups that needed to be worked on: the Gen 4 Glock and the Springfield XDS. While this new shotgun rounds seems cool, I’m not yet buying it. I don’t think I need an OATH Ammunition mutilator at this point. But time will tell.