“Firearms and ammunition is a growing industry, and we came to Las Vegas to share the many reasons Arkansas is a natural fit for this sector,” Hutchinson said in a prepared statement.

Sig, which has its U.S. headquarters in New Hampshire, will open a ammunition manufacturing facility in Jacksonville, located about 17 miles north of Little Rock. The endeavor will create about 50 jobs. 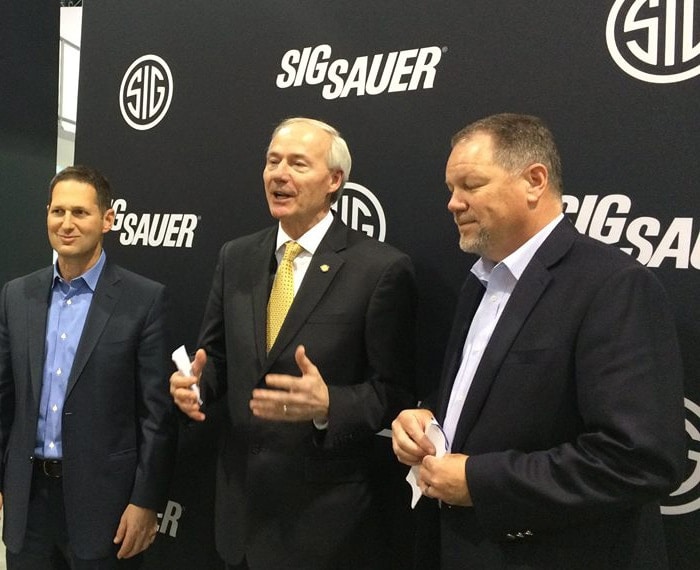 Sig, traditionally known as an international firearm manufacturer, launched its own ammunition brand in 2014. Marketed as self-defense ammo, the Elite Performance Ammunition offers a host of calibers within three different series.

Remington will expand its ammo plant located in Lonoke, located about 27 miles east of Little Rock, with about 84 jobs.

Although Remington has had the facility in Lonoke since 1969, it broke ground on the expansion project in the second quarter of 2014 under then Democratic Gov. Mike Beebe, who also tried to court gun makers.

With last year marking his first year as governor, Hutchinson said his first initiatives were reaching out to the gun makers. He called Sig during his first day in office and met with Remington officials in February 2015.

The Republican governor has had ties to the gun industry. During the 2014 election cycle, Hutchinson received an A-rating from the National Rifle Association as candidate for governor.

A year earlier, the NRA appointed him to head the group’s National School Shield program, an initiative to brainstorm strategies to prevent school shootings as response to the murder of 20 first-graders and six educators at Sandy Hook Elementary School in December 2012.

The findings of the program consisted of armed guards, building walls, adding locks and cameras, and proposed paying for it all through the use of grants. The plan also included an ideal bill to implement the plan along with an amendment to remove gun free zones from school property. Although the NRA funded the endeavor, the group did not immediately endorse the plan.

Last year, Hutchinson signed a number of bills that expand gun rights in Arkansas that include reforming the role of the National Firearms Act in the state and repealing gun free zones in certain areas.