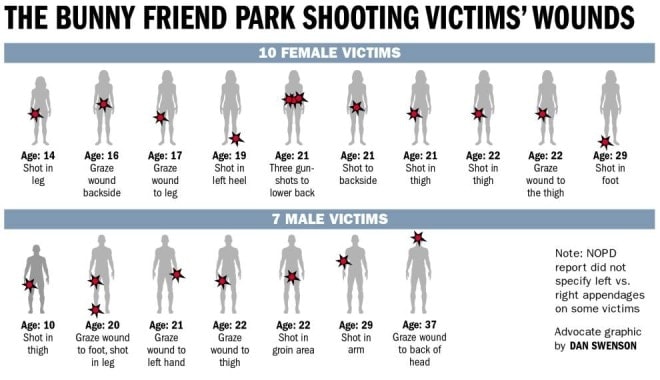 Those charged by a grand jury indictment Wednesday range from 17-29 years in age and have street names such as “Shooter” and “C-4.”

The 15-count indictment, as announced by Christopher Bowman, a prosecutor and spokesman for Orleans Parish District Attorney Leon Cannizzaro, deals with the shooting at Bunny Friendly Park last November.

That event, reported by the New Orleans Times-Picayune to be an “unpermitted” after party for the Nine Times Social Aide & Pleasure Club’s annual second line event led to multiple gunmen involved as an impromptu music video was being shot. New Orleans Mayor Mitch Landrieu described the incident that left 17 injured – including 10 minors – as “domestic terrorism.”

In the subsequent investigation by New Orleans Police, a number of suspects were arrested last month on charges of attempted first-degree murder. Those charges, however, were dropped in favor of negligently discharging a firearm “where it was foreseeable that it might result in death or great bodily harm,” this week, which carries a term of up to 20 years if convicted.

Police suspect at gang affiliations may be an underlying current in the incident though declined to comment on which gangs may be involved.