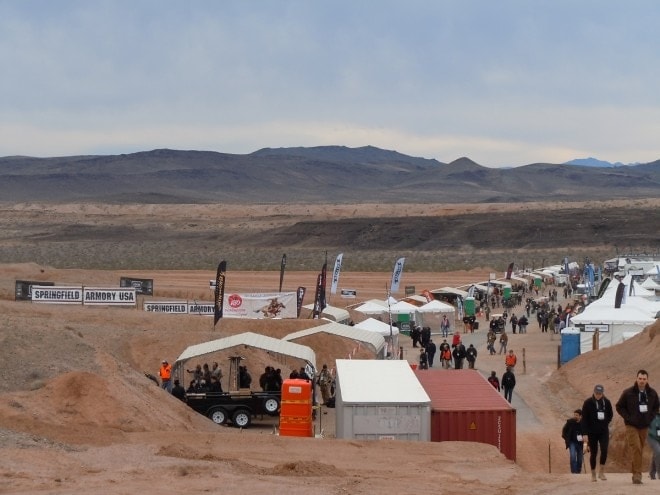 “Range Day sounded like the Battle of Dak To, or perhaps Fallujah…” (Photo: Chris Eger/Guns.com)

“You have to look fairly hard for something designed to kill animals instead of people,” wrote F&S’s David E. Petzal in his regular The Gun Nut column.

Decrying the steady evolution in items from guns to accessories and clothing that have moved away from more traditional hunting and shooting sports towards the growing self-defense, concealed carry and practical shooting market, Field and Stream regular Petzal had a week full of bad days at the 38th Annual event in Las Vegas earlier this month.

Range Day is the Monday prior to the Show’s opening when manufacturers demonstrate their wares. People like me are bussed out to handle the goodies. This year, Range Day sounded like the Battle of Dak To, or perhaps Fallujah, with the distinctive pop-pop-pop of full-auto fire, which was extremely popular amongst all the SEAL wannabes. Indeed, this was symbolic of the whole show, which has now become so heavily militarized that you have to look fairly hard for something designed to kill animals instead of people.

Petzal went on to compare a K9 handler giving a demonstration to an SS panzergrenadier, lament the lack of booth babes (seriously?), lampoon gun politics in relation to gun sales, and bemoan how the hunting oriented booths he did see were poorly presented, writing, “The posters, displays, and photos for anything relating to big-game hunting showed people whose expressions looked like they were getting a prostate exam from the former Secretary of State.”

Comments to the article were mixed, with some agreeing with Petzal while others made effective counter-points.

“Sorry to break it to you guys, but this is the gun culture 2.0,” responded one before going on to advocate,”There will always be a market for the traditional hunting arms that are part of our history and heritage, but in the end, more people are getting involved cause they are realizing that the 2nd amendment has nothing to do with hunting. And that’s what I love about our shooting heritage in this country. It cares not for race or creed, age or sex. But a love and respect of everything with a trigger that goes boom. And in the end, is that really a bad thing?”