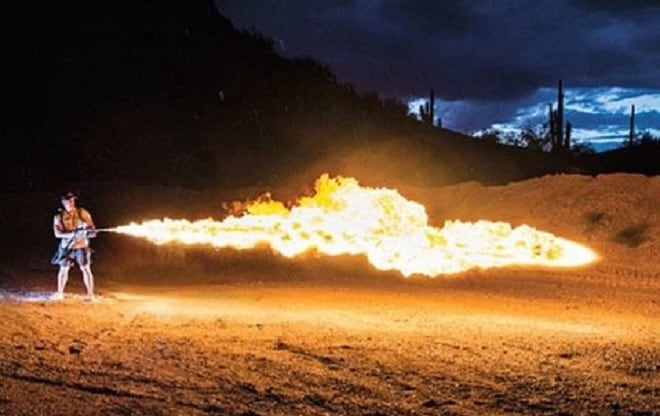 Although there hasn’t been much uptick in flamethrower-attributed crime in recent years, SNL loving lawmakers are breaking out the ban hammer on the devices. (Photo: Throwflame)

A group of Democrats in Washington are seeking to regulate flamethrowers like machine guns in a bill so vague a can of WD-40 and a lighter could potentially land you in federal prison.

The measure, termed the “Flamethrowers? Really? Act” by sponsor U.S. Rep. Eliot Engel, D-NY, in an ode to a Seth Meyers sketch on Saturday Night Live, is needed according to Engel because, well, why not?

“It’s not something I’d thought about before,” said Engel, “because you’d just assume—right?—that flamethrowers would be regulated. It just causes you to scratch your head and say, ‘Really?’”

Engel’s legislation, entered as H.R.4009, back in November, would add “flamethrowers” to the list of items regulated by the Bureau of Alcohol, Tobacco, Firearms and Explosives under the National Firearms Act, specifically the same way machineguns are. In effect, banning the devices from transfer or possession of new flame devices after the legislation takes effect as well as unauthorized transport across state lines.

The definition used by Engel would rule “any nonstationary or transportable device designed or intended to ignite and then emit or propel a burning stream of a combustible or flammable substance a distance of at least 6 feet,” as a flamethrower.

“This bill is a solution in search of a problem that does not exist and Representative Engel appears completely unaware of the lawful uses of flamethrowers,” noted Second Amendment attorney Joshua Prince with the Firearms Industry Consulting Group explained to Guns.com.

Prince found, after review, there was not a documented case of an individual using a flamethrower in commission of a crime. However, there are a number of documented lawful and beneficial uses of flamethrowers and burning devices, especially in the agricultural and land management context.

“For instance, flamethrowers are utilized to ignite controlled burns in relation to sugar cane, bamboo and other similar invasive plants,” said Prince. “They are also used by roofers for installing rubber roofing, whereby the flamethrower is utilized to heat the roofing material, until the asphalt melts and interlocks with the roofing surface. Additionally, they have been used by many in rural areas to melt snow, especially after massive snowfalls and to assist emergency responders access locations during massive snowfalls.”

The Pennsylvania-based attorney contends the move by Engel only serves to restrict law-abiding citizens’ rights, while failing to address any actual issue within society.

“If representatives truly want to offer a solution to a documented problem within the United States, maybe they should consider why an individual, convicted on numerous occasions of driving under the influence, is not stripped of his/her privilege to own a car, while an individual convicted of a single non-violent misdemeanor conviction, for which the individual did not even spend a night in jail, strips that individual of his/her Constitutional Right to Keep and Bear Arms in perpetuity,” Prince said.

Those in the burgeoning flamethrower industry tend to agree with Prince’s assessment.

One of the leading makers of recreational and agricultural flame devices, Throwflame, home to the $1,500 X15 backpack flamethrower, contends Engel’s bill is a exercise in false arguments.

“There were zero injuries or deaths from flamethrowers last year in the state of New York,” Throwflame CEO Quinn Whitehead told Guns.com. “There have been thousands and thousands of deaths from knives, bats, and unenforced illegal gun sales in New York. Leave it to a liberal democrat to fear monger and grandstand on 1,000-year-old technology that is used daily by farmers, ranchers, firefighters, and forestry services. WD-40 and hairspray would qualify under this solution without a problem. Sophistry at its finest.”

H.R. 4009 has been referred to the House Subcommittee on Crime, Terrorism, Homeland Security, and Investigations and has three co-sponsors, all Democrats.