FBI: Oregon standoff not over, more arrests made 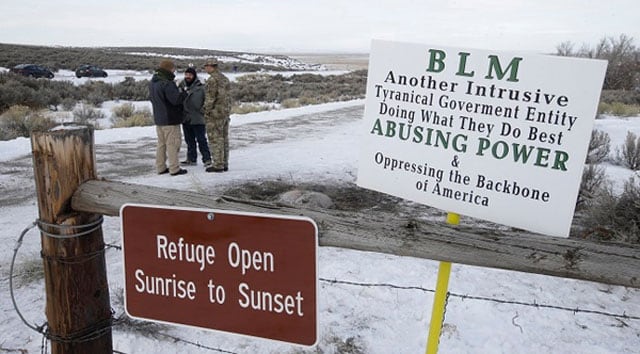 Despite media reports stating otherwise, the FBI confirmed the standoff has not yet come to an end and there are still protesters occupying the wildlife refuge. (Photo: Rick Bowmer/AP)

As the occupation of the Malheur National Wildlife Refuge in Burns, Oregon, enters into its fifth week, the number of protesters have dwindled to less than half a dozen as more arrests were made while federal officials work to bring the occupation to a close.

Following the arrest of eight members of the occupation Tuesday and a subsequent officer-involved shooting that left one of the members dead, the Federal Bureau of Investigation and the Oregon State Police worked together to establish a series of checkpoints surrounding the refuge. After the arrests and shooting, but before the checkpoints were established, several vehicles left the facility, the FBI confirmed in a release Wednesday.

After the checkpoints were established, eight additional individuals left the refuge, with three of those arrested on probable cause warrants. Duane Leo Ehmer, 45, of Irrigon, Oregon, Dylan Wade Anderson, 34, of Provo, Utah, and Jason S. Patrick, 43, of Bonaire, Georgia, all surrendered peacefully and without incident at the checkpoints. They, like the eight members of the group arrested earlier this week, were charged with a federal felony count of conspiracy to impede officers of the United States from discharging their official duties through the use of force, intimidation, or threats.

A statement issued Thursday by Greg Bretzing, Special Agent in Charge of the FBI in Oregon, confirmed that a ninth individual left the refuge through a checkpoint without incident and they believe there are still four remaining protesters at the facility. The FBI said authorities are working “to empty the refuge of the armed occupiers in the safest way possible.”

Bretzing was quick to dispel rumors spread by media that the situation had been resolved, emphasizing that is not true.

“We still believe there are occupiers on the refuge,” Bretzing said, adding, “The negotiators continue to work around the clock to talk to those four people in an effort to get them to come out peacefully.”

Guns.com will continue to provide updates on this developing story as they become available.