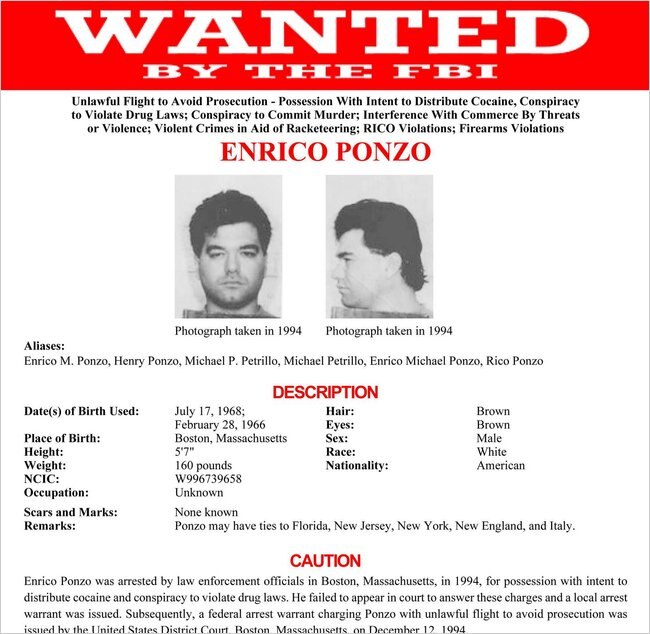 A Boston Mafia associate, a fugitive from the law for 16 years, pleaded guilty to unlawful possession of firearms charges in the a Boise federal court, the Justice Department said Monday.

Enrico Ponzo, also known as Jay Shaw, who posed as a rancher in Marsing, Idaho, while on the run from a number of charges in Boston, admitted in federal court Monday to having knowingly possessed 33 firearms on Feb. 8, 2011 — the date of his arrest by the FBI and U.S. Marshals — despite having been convicted of felony assault and battery on a public employee.

According to Ponzo’s indictment, at the time of his arrest, law enforcement officials seized a total of 33 pistols, rifles and shotguns from his residence.

Additionally, authorities seized Ponzo’s land and home, more than $100,000 in cash; personal property including precious metals and jewelry, and eight vehicles including a 2002 Harley Davidson Motorcycle and a 1952 Willey’s Jeep.

Prior to his guilty plea, Ponzo was facing four counts of unlawful firearms possession, as well as 12 counts of various identity theft-related charges.

Following the arrest in Idaho, Ponzo was returned to Boston to face numerous charges, and in Nov. 2013 — following a seven-week-long jury trial — Ponzo was found guilty of many crimes and sentenced to 28 years in prison, followed by three years of supervised release, by U.S. District Court Judge Nathaniel Gorton, according to the release.

Unlawfully possessing firearms is punishable by up to 10 years in prison, a max fine of $250,000, and up to three years of supervised release.