Man fatally shoots robber who held his wife at gunpoint 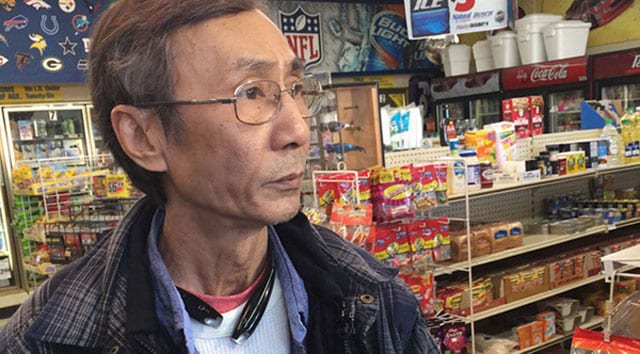 Buntahn Te came to the United States from Cambodia back in the 80s and has owned the store for more than a decade. (Photo: Fox)

A dramatic shootout between a Dallas store owner and two armed robbers Tuesday night ended with a dead suspect in the parking lot.

Bunthan Te, owner of the Shop-N-Go, said his wife was behind the counter and he was toward the back of the store when two men, armed with guns, entered the store and demanded money around 9:45 p.m. A third suspect was apparently waiting in a car outside.

One of the suspects jumped over the counter to get to the cash register, and held Te’s wife at gunpoint. Te, in turn, attempted to pull his own gun, but he told a local Fox affiliate that it got hung up in the holster.

He then made his way to the walk-in refrigerator, where the suspect followed him and opened fire. Te wasn’t struck by the suspect’s bullets, but by that time he was able to get his gun out of the holster and returned fire. The suspect fled and Te returned to the front of the store to check on his wife. The suspect who had held her at gunpoint was still there, so Te opened fire a second time and an exchange of gunfire ensued.

The second suspect ran out of the store, but it wasn’t until after Te ran out after him that he realized the suspect, who collapsed in the parking lot, had been shot. Meanwhile, the remaining two suspects fled from the scene, leaving their wounded accomplice behind.

When police arrived, they found the suspect lying in the parking lot. He was pronounced dead at the scene, but has not yet been identified. The remaining two suspects are still at large.

Security cameras are installed at the store, but it’s unsure if they are in working condition. However, surveillance video at a business across from the store captured images of the three suspects walking around in the parking lot, as well as the vehicle they were driving.

Te, who customers describe as a friendly old man, said he isn’t particularly fond of guns, but keeps one solely to protect himself and his wife, both of whom were uninjured during the attempted robbery.