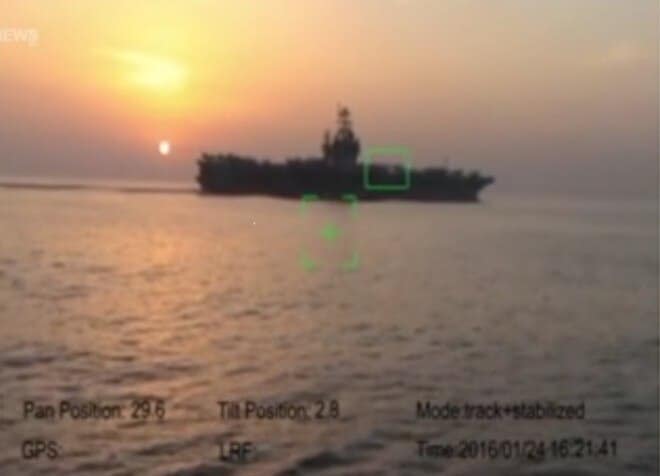 The Iranians took some pictures of what looks like a carrier, but they also built a fake carrier last year, so there’s that…

The Iranian military is claiming to have buzzed U.S. and French carriers in the Persian Gulf with an UAV and submarine and are broadcasting the footage far and wide.

The footage, released through the Iranian Tasmin News outlet, alleges to show a Ghadir-class midget submarine (a small cranky diesel boat built to a North Korean design) getting some periscope images of a large aircraft carrier with the silhouette similar to a U.S. Navy Nimitz-class vessel in the distance.

Another video, seen here, is described as showing an unmanned drone flying over a U.S. carrier.

It is not clear when or if either incident occurred and the only matching ship in the region is the USS Harry S. Truman which is operating in the Persian Gulf attached to CENTCOM supporting Operation Inherent Resolve against ISIS in Iraq and Syria.

The U.S. 5th Fleet said they cannot confirm the footage, as there is a lot of publicly available video of U.S. carriers at sea. In fact, Iran even built their own floating scale mock-up of a U.S. Nimitz-class carrier last year which they proceeded to blow up in a dramatic fashion, leading to the possibility of a faked moon landing type of thing from Tehran.

The Navy did confirm that on Jan. 12 an Iranian unmanned aircraft flew first towards the French aircraft carrier Charles de Gaulle, who identified it and came to the conclusion it was unarmed. After this the drone proceeded to overfly the Truman. Both vessels were in international waters at the time.

“The UAV flew directly over USS Harry S. Truman. Because the UAV was unarmed and posed no risk to the carrier’s flight operations (since it wasn’t flying at the time), we determined that while the Iranian UAV’s actions posed no danger to the ship, it was however, abnormal and unprofessional,” said the Navy in a statement.

One thing is for sure though, as the Truman Strike Group contains numerous Aegis guided missile destroyers capable of tracking hundreds of airborne, surface and undersea targets at a time and the French carrier has her own escorts to include the brand-new Royal Navy destroyer HMS Defender, if the Iranians had a bead on the ships, the ships more than likely had a much larger bead on the Iranians.