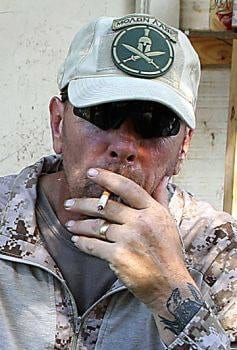 A Texas member of the militia group known as “Rusty’s Rangers” or “Rusty’s Regulators” was sentenced this month to 41 months in prison for felony possession of a firearm.

Kevin Lyndel Massey, 49, pleaded guilty to the charges in Texas federal court after a bench trial in September.

According to court records, the Rusty’s  Rangers consisted of citizens who mounted armed patrols in the Rio Grande area allegedly in search of and to possibly apprehend aliens attempting to enter the U.S. illegally.

On Aug. 29, 2014, law enforcement agents were pursuing suspected illegal aliens in heavy brush when they encountered an individual of the group. A Border Patrol agent allegedly perceived him as a threat and discharged his weapon, but did not strike the armed citizen.

Massey, following the shooting, arrived in the area armed with a .45-caliber pistol and a 7.62x39mm rifle. According to court records, he was thereafter identified by law enforcement who learned of his prior criminal history which included burglary. Because of this criminal history, Massey is prohibited from possessing a firearm.

Massey had previous convictions. In 1988, he was sentenced to five years in prison for burglary, which revoked his probation from a 1985 arrest for another burglary.

The court heard that Massey was later arrested Oct. 20, 2014, outside a motel in Brownsville. At the time, according to trial testimony, he was armed with a .45-caliber pistol, while another .45-caliber pistol was thereafter located in his motel room. At that time, more than 2,600 rounds of ammo were seized in connection with the search of his truck and motel room.

He will remain in custody pending transfer to a U.S. Bureau of Prisons facility to be determined in the near future.