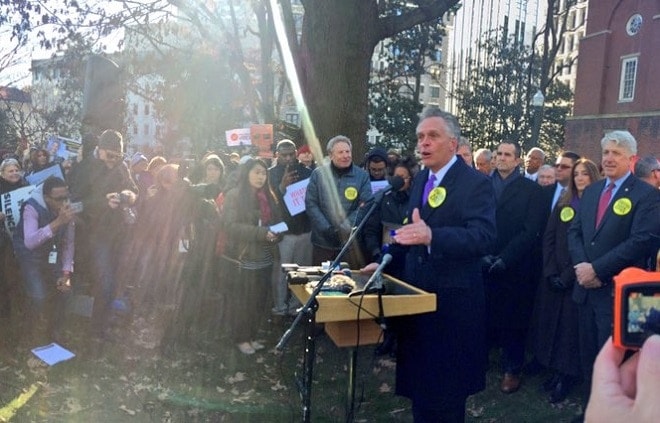 McAuliffe, seen speaking at an MLK vigil 11 days ago on the need for more “common sense gun laws” in the state with gun rights advocate Andy Parker to his right and Atty Gen. Herring behind him, walked back the Commonwealth’s decision to stop recognizing carry permits from half the country on Friday. (Photo: GovernorVA via Twitter)

Over the howls of gun control advocates, Gov. Terry McAuliffe has brokered a deal with top Republicans to avoid canceling concealed carry agreements with over 20 states.

In a press conference Friday afternoon at the Capitol with Republican Rep.William J. Howell– the GOP Speaker of the House of Delegates– in tow, McAuliffe outlined a plan to jettison a plan by Attorney General Mark Herring, announced in December, to no longer recognize concealed carry permits from half the states in the country over fears those licenses did not meet the same guidelines as Virginia.

Herring’s move has since received intense backlash and threats of legal action.

In exchange, Herring’s office will work to ensure that individuals prohibited from obtaining a Virginia permit will not be able to obtain one from other states and carry using those permits in the Commonwealth. Further, the Virginia State Police will move forward with a plan to send troopers to gun shows to provide voluntary background checks for private gun sales.

The Republicans in turn have agreed to help shepherd a proposal through the legislature that would prevent some gun owners with certain protective orders from possessing firearms for the length of the order.

In the end, besides keeping the list of states where reciprocity was slated to end, others could be added.

McAuliffe spoke of the compromise as being “historic” and would make the state a safer place.

The backpedaling by McAuliffe comes just two weeks after he spoke proudly of his “F” rating from the National Rifle Association at a Jan. 18 vigil for slain civil rights leader Martin Luther King and repeated his desire to take on the Virginia General Assembly over gun politics, saying, “We have not changed our tune one iota and we are just warming up.”

However, since then a packet of anti-gun proposals was scuttled by the Virginia Senate for the second year in a row while a move to bring constitutional carry to the state advanced.

This apparent change in the direction of the breeze on gun policy in Richmond did not go unnoticed by gun control advocates.

Andy Parker, father of murdered WDBJ-TV reporter Alison Parker, who stood by McAuliffe through a press conference last October on the governor’s executive actions on gun control and on several occasions since, has had a change of heart in his support.

“Gov. McAuliffe should not be willing to recognize concealed carry permits from states where you can get a permit with no safety training, or even if you have a violent criminal record or a stalking conviction – all in exchange for the NRA’s support of watered-down gun safety bills,” said Parker in a statement released through Everytown on Thursday.

The group, backed financially by former New York Mayor Michael Bloomberg, released a letter signed by Parker and more than a dozen other members of their Survivor’s Network blasting the Governor before Friday’s official announcement.

Describing concealed carry permits issued in other states as, “practically a giveaway” they called McAuliffe’s move Friday wrong and unsafe stressing that when he ran for governor he was “different.”

Speaker Howell, who last month heaped criticism on Herring’s move to severe reciprocity agreements, said there was broad support within the GOP caucus for the agreement and tweeted, “The reciprocity piece was very important to the House. I am glad we were able to reach an agreement.”

The reciprocity piece was very important to the House. I am glad we were able to reach an agreement.