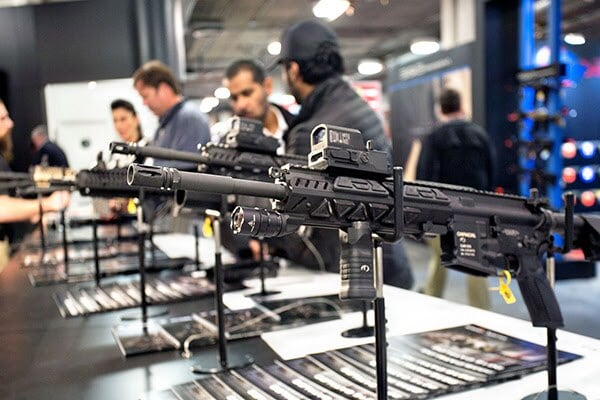 Caracal and Wilcox Industries have debuted the first in their line of integrated tactical rifle systems as a part of the companies’ recently-confirmed strategic partnership: the CAR816-A2 with Fusion System Kit.

The CAR816-A2, which is being manufactured at Wilcox’s New Hampshire facility and will be available in a limited capacity for 2016, has been “designed for the defense and security market with a commercial application,” the companies said.

“Our partnership with Wilcox has redefined the approach to integrated weapon systems. The CAR816-A2 with Fusion System is the first product collaboration between our two companies, delivering firearms that meet the critical needs of law enforcement officers and the modern warfighter,” said Caracal CEO Hamad Al Ameri.

The “tactical rifle” operates on a “short stroke push rod gas piston operating system, controlled by an adjustable gas block with three positions – supressed, unsupressed and a setting for operating in adverse conditions,” according to the release.

The release indicates that the Wilcox Fusion System Kit – which supplies power for a red dot sight, integrated visible laser, IR laser and fixed IR illuminator –is a lightweight rifle forearm system hosting a quick-change battery compartment in the grip.

Caracal – the only original equipment manufacturer in the Middle East – manufactures firearms and sniper rifles, as well as other “light weapons,” and gears its weapons manufacturing to “international civilian, military, law enforcement and sporting” markets, according to the release.

Caracal is now backed by the Emirates Defence Industries Company, a “strong industrial parent company,” an arrangement that allows them to receive a large amount of resources to drive the company’s next growth phase, the release continued.

Wilcox designs and manufactures tactical equipment for use by U.S. military and law enforcement, and produces product lines like Night Vision Mounting Systems, Small Arms Systems, the PATRIOT Hybrid Life Support System and Combat Systems, according to a release.

Caracal’s partnership with Wilcox was announced just before this year’s SHOT Show in Las Vegas.

“We are proud to have Caracal working and collaborating alongside our team. This unique partnership represents the future of the industry, where leading experts from around the world unite to develop cutting-edge products for the market,” said Jim Teetzel, Wilcox’s founder and CEO.

According to the terms, Caracal USA – the company’s U.S.-based subsidiary – will co-locate its headquarters with Wilcox, and the Idaho office will serve its marketing needs.

The weapons targeted for U.S. production include Caracal’s 5.56MM CAR 814 and the Car 816, which are both designed with the sporting market in mind, according to the release. Additionally, the defense and security markets will be able to purchase “select-fire variants” of both rifles.

And with Caracal producing the CAR family of rifles in the U.S., both companies will be able to compete for U.S. government arms contracts, the release said.

Additionally, Caracal will be able to import its Haenel sniper rifle “under license and on a limited basis.”

“This partnership brings together Caracal with an innovation leader when it comes to tactical products for special forces units,” Al Ameri said in a release. “In addition to the CAR816-A2, Wilcox and Caracal will begin manufacturing the CAR 814 direct impingement rifle and the new generation Enhanced F pistol at Wilcox’s facility. Our teams are already working together to design and develop new Caracal products customized for the U.S. market.”