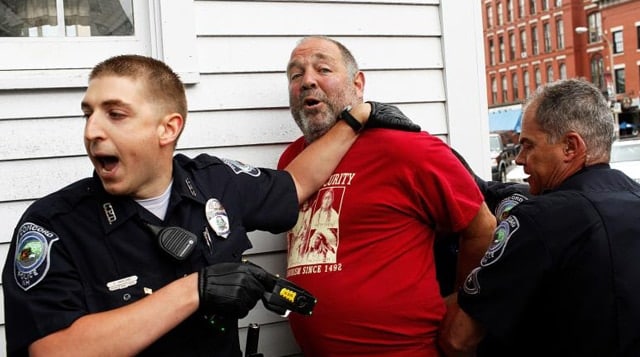 Daniel Musso, center, during an arrest in 2013 for disorderly conduct — he interrupted and harassed a person giving a speech during a gun control rally.

A New Hampshire man was arrested by federal agents last Wednesday for the unlawful receipt and possession of four hand grenades from an undercover agent.

Daniel E. Musso, Sr., of East Kingston, was arrested without a warrant by the Federal Bureau of Investigation and other law enforcement officers last week following a nearly six-month long investigation that ended with Musso’s purchase of grenades from an undercover federal agent, according to the court documents.

Federal law makes it illegal for any person to “receive or possess a firearm which is not registered to him in the National Firearms Registration and Transfer Record,” and defines a grenade as a firearm to be registered.

According to the affidavit, the FBI first learned of Musso’s desire to buy illegal firearms and ammo in August 2015, after supplying in July of that year a hand-written list of items he hoped to buy from a New Hampshire-based federally licensed firearms dealer.

Musso allegedly wanted to buy 10 different calibers of ammunition in specific quantities, at an estimated retail value of $16,000, as well as additional items including a gas mask, “night/infrared system,” C4 explosives, rockets and “grinades,” according to the affidavit.

Musso paid the dealer $6,000 in cash on Nov. 8 and requested the “available” items from his list. The dealer provided Musso with a large quantity of rifle and handgun ammunition that had a retail value of about $2,800. The defendant then wrote on the back of the original order several items he wished to purchase with the remainder of his initial $6,000 payment.

The additional items requested by Musso included three gas masks, additional ammunition and magazines, and six “grandees,” which he referred to as “special things” and requested “the best” the dealer had, according to the affidavit.

Musso, who was identified by the Bureau of Alcohol, Tobacco, Firearms and Explosives as not possessing the proper license to purchase or own grenades, requested that the dealer set him up with someone the dealer knew who had the explosive weapons for sale – actually an undercover federal agent, according to the affidavit.

According to the affidavit, on Jan. 22, Musso met with the undercover agent and negotiated the purchase of six grenades at a cost of $150 each, to be paid out of the funds being held by the initial dealer.

Musso additionally asked about “rocket type stuff” and the purchase of additional grenades, and explained he belonged to “a group of people bringing forth ‘the original constitution,’” and explained he was concerned about the government discovering his group’s efforts. According to the affidavit, Musso explained “that is why I need some of this stuff,” and requested the undercover agent to check on the cost of C4 explosive.

The affidavit indicates that Musso told the agent he’d been “looking for a ‘source’ for a while,” and his group had $100,000 to $200,000 in cash available to purchase the additional items needed.

According to the narrative, Musso agreed to meet the undercover agent in the late morning in Seabrook on Jan. 27 to pick up the grenades.

On Wednesday, Musso was arrested for violating federal firearms law after he picked up the package containing four grenades from the undercover agent, who was under the surveillance of Christiana and other federal agents.

In 2013 Musso – whose home has been raided and searched by federal agents since his arrest – was arrested and charged for disorderly conduct, assault and resisting arrest following a confrontation with police outside of the state capitol during a rally organized by the Mayors Against Illegal Guns campaign. He interrupted a speech during the demonstration, refused to backdown and was eventually tasered by officers.