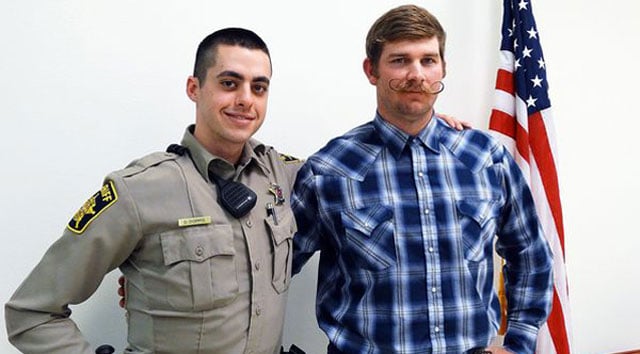 Scott Perkins (right) is credited for saving the life of Bastrop County sheriff’s deputy Dylan Dorris (left) by scaring off a suspect who was reaching for the deputy’s gun. (Photo: Jillian Beck/Statesman)

A struggle over a Texas deputy’s gun last month could have ended badly if it weren’t for a veteran with a concealed handgun license who intervened and got the suspect to stand down.

Bastrop County sheriff’s deputy Dylan Dorris, 23, responded to a call Jan. 16 around 9:45 p.m. about a man who was driving erratically with a child in the vehicle. Dorris initiated a traffic stop, but the suspect drove off, before eventually stopping at a gas station.

Dorris caught up with the suspect, who became combative and engaged in a physical altercation with the deputy. In the midst of the fight, the suspect tried to reach for Dorris’ service weapon.

“I remember thinking stay in the fight. Just keep fighting, keep fighting. Do whatever you can do, just stay alive you need to go home,” Dorris later told the Statesman.

It was then that Scott Perkins, a concealed handgun license-holder and Marine veteran, saw Dorris struggling and decided to intervene. Perkins pulled out his gun and told the suspect to “freeze.” The suspect then stopped fighting with the deputy and again fled from the scene.

Authorities eventually again caught up with the suspect, who was later identified as Kenton Desean Fryer, 32. Fryer was arrested and charged with aggravated assault of a public servant, taking an officer’s weapon, evading arrest or detention with a vehicle and driving while under the influence with a child under 15. He is being held at the Bastrop County Jail under a $50,000 bail.

Dorris was taken to a local hospital where he was treated and released for minor injuries he sustained during the fight with Fryer.

Authorities praised Perkins for his quick thinking and calm actions.

“I’m alive today because of him,” Dorris said. “There are no words to explain it. He’s such an outstanding citizen. He’s here for our country, our community.”

Sgt. James Davenport said most people who witness such an event would just keep going.

“To see someone that will stop and help is special,” Davenport said.

But Perkins, who served two tours in Iraq, said he’s no hero, he just did what needed to be done.

“Anytime somebody is in need of help you should assist them. It doesn’t matter whether your life is in danger or not, you should always assist anybody who is in need,” he said.

Nonetheless, the Bastrop County Sheriff’s Officer plans to formally honor Perkins for assisting Dorris in a time of need.

“I think it’s important to note, with the uproar that we have on gun laws, that had Mr. Perkins not had his concealed gun on him, that suspect would have likely not paid attention to him,” stated BCSO spokeswoman Sissy Jones. “This is a situation where being a license to carry holder truly did save a life.”