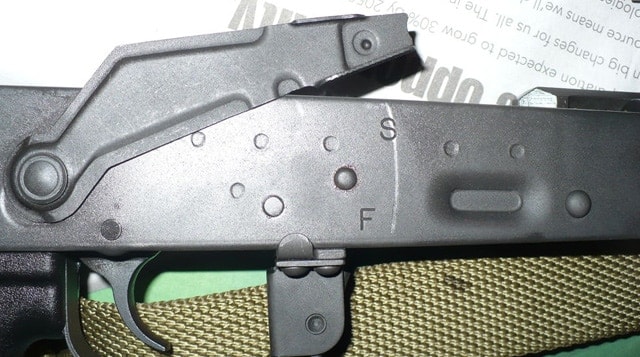 The safety selector on a Century Arms AK-47 pushed above “safe.” The image is part of a review posted on a forum in which the user said he liked the gun. (Photo: Gun Boards)

A class action lawsuit brought against Century Arms claims the gun company produced a series of rifles with a defective safety and has made no effort to fix the problem.

The lawsuit, seeking $5 million, was filed in a Florida federal court on Jan. 19. It says the safety selector on Century’s AK-47 rifles “will not and has not prevented an accidental discharge” when switched above the safe position.

“This problem is caused by the inadequate design, manufacturing, and testing of the Class AK-47 Rifles and the Safety Selector mechanism,” the lawsuit says.

Century, a company headquartered in Delray Beach, Florida, is a known importer of AK-47 rifles and, per federal law, must modify the firearms to comply with U.S. regulations before they enter commerce. The company did not respond to Guns.com’s request for comment.

The lawsuit says Century has failed to warn consumers about the alleged defect and attempted to conceal the issue by stating in user manuals that the safety would properly engage. The complaint lists 10 counts of civil fraud and neglect violations.

The attorney representing the class, Angelo Marino, worked on a separate class action case against gun maker Taurus International that resulted in settlement valued at more than $30 million.

“This is not a political thing, it’s simply going after a company that we feel has manufactured a substandard rifle,” Marino told Guns.com about Century, and went on to describe the defect to be widely discussed in online forums and videos. “This has gone on for a long time, yet, nobody’s attempted to cure the problem,” he added.

The lawsuit lists the lead plaintiff as J. Steven Erickson, of St. Louis, who witnessed the defect firsthand with his Century rifle, a Model 1980 chambered in 7.62x39mm, last August.

While at a shooting range, Erickson let a fellow patron use the gun and when the patron handed it back, the safety selector advanced beyond the safe position and discharged a round. “Fortunately, the bullet or projectile from the Class AK-47 Rifle struck no human,” the lawsuit says. Erickson bought the rifle rifle new in 2011.

As for other plaintiffs, the lawsuit says, “the exact number and identity of Class Members are not presently known,” but individuals who own a Century AK-47 rifle with a “safety selector device” manufactured after 1995 can participate.

“Instead of impinging upon the Second Amendment, this lawsuit is brought by and on behalf of individuals who have lawfully exercised their Second Amendment right to bear arms,” the lawsuit says.