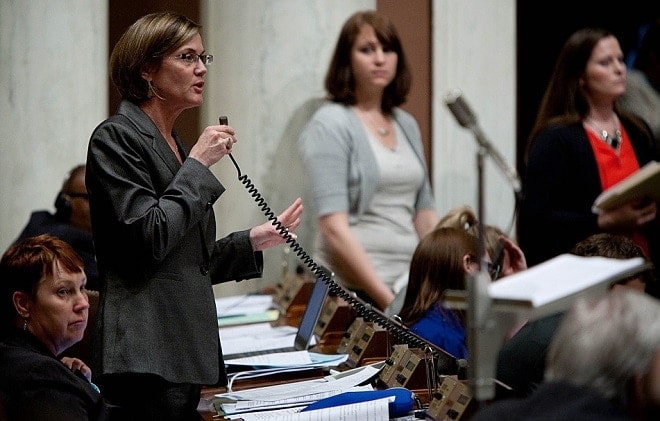 The sweeping proposed changes include a nearly one month potential waiting period, universal background checks on transfers, proof of training and mandatory gun lock use.

The measure, proposed by Minnesota state Rep. Kim Norton, D-Rochester, was prefiled for the upcoming legislative session, and announced last week by her office.

“Without safeguards like the ones under this bill, it is only a matter of time before the next accident, injury or death caused by a gun in the wrong hands, and it is simply unacceptable to do nothing,” Norton said in a statement. “While President Obama’s executive order was a good step forward, states like Minnesota need to take action to address preventable tragedies.”

Her bill, HF 2415, takes a number of actions that if adopted could change many of the state’s gun laws.

Chief among the proposed amendments would be that anyone receiving a firearm in the state first show proof of training completed within the past five years with no exceptions listed. Those who acquire a firearm without training would be guilty of a misdemeanor while providing a fake training document would be a felony.

As part of this requirement, Norton’s bill would expand hunter’s safety courses in the state, directing them to add instruction in the legal aspects of firearms ownership and use, despite the fact that the course is currently set up for youths aged 11 years and up.

In Minnesota, state law currently requires a free permit to purchase a handgun that has to be issued or denied within seven days. Under Norton’s plan, this period will stretch out to 28 days, effectively putting up to a month long waiting period on buyers.

To control private gun transfers, the sales of pistols and “semiautomatic military-style assault weapons” would have to take place only through a federally licensed firearms dealer after a background check was completed. The dealer would be allowed to charge a $25 fee in exchange for the service but, should a check reveal something that would prevent the sale, the FFL would be obligated to inform law enforcement of the attempted transfer.

In addition, transfers on death, loans between firearms collectors at an exhibition, temporary loans of less than one day, and transfers of antique firearms currently allowed under state law would have to go through a dealer as outlined in Norton’s proposal.

“An overwhelming majority of Minnesotans of both political parties – and even a large majority of gun owners – support universal background checks,” said Norton. “It’s incomprehensible to me that what amounts to the minor inconvenience of requiring a background check for every gun sale or transfer is so objectionable in the wake of what’s happened.”

Finally, gun owners would be required to safely store their firearms when not in use. This would include having them unloaded and secured with a locking device or inside a safe or lock box. Failure to do so would be a misdemeanor.

Norton, who is in her last term as a state lawmaker after a decade in the chamber, feels she is on a mission to bring the proposal to the legislature.

“Having the courage to take action to address this serious public health crisis for our society needs to be held to a higher importance than a perfect score on the NRA’s scorecard,” she said.

State Second Amendment advocates on the other hand see her Hail Mary for new gun restrictions as a red flag.

“Rep. Norton’s proposal is filled with the failed gun control strategies of the past,” said Rob Doar, political director of the Minnesota Gun Owners Caucus & Political Action Committee in a statement.

“Waiting periods, mandatory training requirements, and additional storage requirements have all been tried before with no noticeable impact on gun violence,” Doar continued. “It’s unfortunate that Rep. Norton has ignored the real issues with gun violence in Minnesota, including improving access to mental health, dealing with the widespread under sentencing of firearms crimes in the courts, and adding funding to urban police forces where gun violence remains a challenge.”