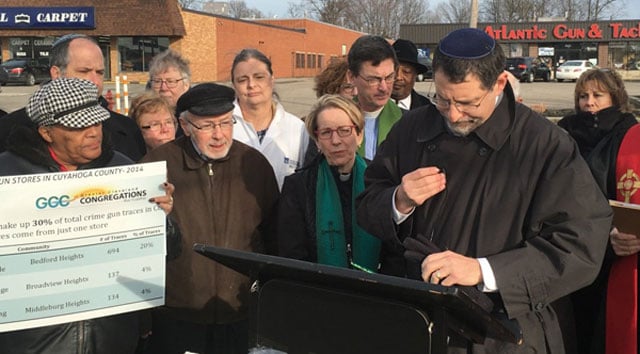 Those in attendance called for stricter guidelines on sales and second thoughts from gun manufacturers on who they would supply firearms to. (Photo: Chanda Neely/Cleveland.com)

Over 50 religious leaders from the Cleveland area gathered outside of Atlantic Gun and Tackle in Bedford Heights Tuesday afternoon, calling for the gun dealer to cease sales to criminals, but the shop’s owner claims they do everything by the book and have never intentionally sold to criminals.

Between January 2012 and June 2013, 20 percent of the guns recovered from crime scenes in Cuyahoga County were traced back to Atlantic Gun and Tackle, Pastor Eric Dillenbeck, who attended the rally, which was organized by the group Greater Cleveland Congregations, told a local NBC affiliate. According to reports from Cleveland.com, last year alone, the Cleveland Police Department recovered 123 guns used in crimes that were initially purchased at Atlantic Gun and Tackle.

“Gun violence has taken a heavy toll on our community, and gun manufacturers and dealers can and must act responsibly and adopt sales practices that will help stem the flow of crime guns,” said Rabbi Joshua Caruso, chair of the GCC.

Citing the link between guns recovered and crimes in the county, the group demanded the gun shop, which is located about 20 miles outside of Cleveland, to turn over sales records. But owner of Atlantic Gun and Tackle, Sam Borsellino, likened blaming his shop for area crime to saying the Ford Motor Company is responsible for car accidents, and called the idea “ridiculous.” Furthermore, he said he’s not surprised at the number of guns that have been traced back to his shop, but also confirmed that no firearm has ever left his shop without a background check.

“Of course we’re going to have a lot of guns out there,” Borsellino explained. “We’ve been in business for 60 years. Nobody around has sold as many guns as we have.”

Last year the Cleveland City Council voted in favor of a gun offender registry, which would require those convicted of a gun-related crime to add their names to a city register, similar to a registry for sex offenders. The measure also prohibited negligently transferring a firearm to a felon. But in addition to the gun control legislation, the group is asking gun manufacturers to think twice before supplying firearms to dealers like Atlantic.

“It’s the manufacturers like SIG Sauer, Glock Baretta, and Hi-Point who have the power to get dealers like Atlantic to change their ways,” said GCC leader Donna Weinberger, who noted shops like Atlantic are “flooding our streets with illegal guns.”