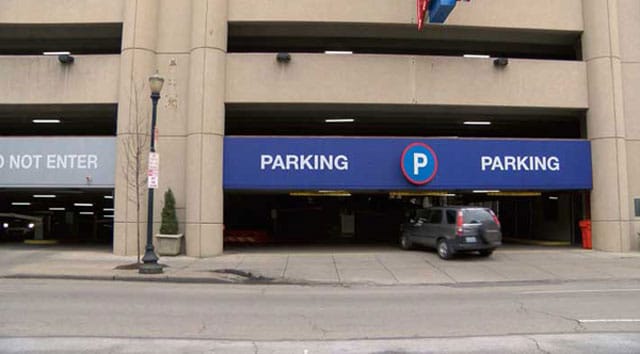 The area where the assault occurred is typically considered safe, and the fact that it happened in broad daylight at a time when people are known to be around, has some residents fearing for their safety. (Photo: WAVE 3)

A man armed with a knife was apparently caught off guard last week when he attempted to rob a woman in a Louisville parking garage, only to find out she was carrying a pistol in her purse.

According to authorities, the woman was leaving work around 6 p.m. Jan. 26, when a man approached her in the parking garage, put a knife to her throat, then pushed her into her car and demanded money. The woman didn’t reach for her wallet, but instead pulled out a pistol and shot her attacker.

The woman, whose name has not been released, immediately left the area and called the police. When officers arrived on the scene, the woman flagged them down, with her wounded attacker heading up the road a short distance away.

The suspect was transported to a local hospital, where his wounds did not appear to be life-threatening. He now faces charges for robbery and assault. The woman was not reported to be injured and, according to Louisville attorney Brian Butler, her actions will likely be ruled justified.

“If this man is robbing her, he has hit her, he has a knife to her throat, she has every right in the world to shoot him,” Butler told WAVE 3, adding that the state’s Castle Doctrine laws not only apply to an attack in the home, but in a person’s car as well.

Butler praised the woman’s actions and said it was a good thing she had a gun, knew how to use it, and was able to go home to her family that night.

But the incident has others who work in the area feeling more than uneasy.

“It’s extremely scary,” said Brenda McWaters, who works at the Cathedral next to the parking garage. “We had someone snatch a purse from one of our parishioners that was leaving church recently in the daylight.”

McWaters said she and others who work downtown are aware of safety concerns and do what they can to avoid danger, like never walking to their cars alone. But Butler said he hopes last week’s incident will leave other would-be robbers wondering what a lady might be carrying in her purse besides cash.