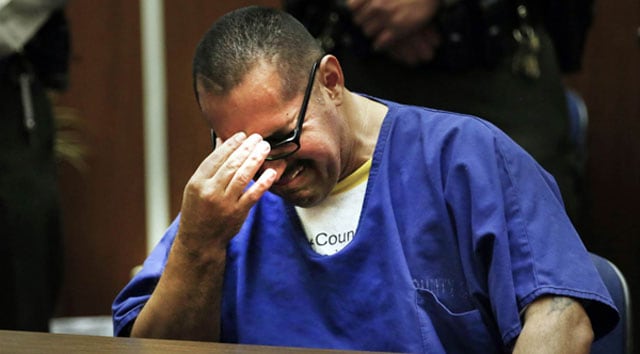 Luis Lorenzo Vargas reacts in a courtroom to learning he was exonerated after serving more than 30 years in prison for a case of arson that killed a mother and her five children. (Photo: AP)

A report published Wednesday by the University of Michigan Law School shows the number of people set free after serving prison time for crimes they were later cleared of reached an all-time high in 2015.

According to the National Registry of Exonerations, a project compiled by the university, 149 people were exonerated last year after spending an average of 14 and a half years in prison. About one-third of the exonerees, 47, were serving time for drug crimes, while 54 had been wrongly convicted of murder. Of those convicted of murder and later exonerated, five were on death row, awaiting execution when their convictions were overturned.

The report indicates that more than two dozen of the wrongful convictions came after the suspects falsely confessed to the crimes for which they were accused. Furthermore, the majority of such confessions came from children or those who were mentally handicapped.

Texas saw the greatest number of exonerations, followed by New York and Illinois, while more than two-thirds of exonerees were minorities, with half being African American.

Samuel Gross, a law professor at the University of Michigan who runs the registry, said last year’s numbers are an indication of the slow, yet steady change at the way exonerations are being viewed.

“We know very little about the sorts of mistakes we make, or how frequently they happen,” Gross said.

Brooklyn District Attorney Ken Thompson pointed out that wrongful convictions result in a serious damper on “the public’s confidence and trust in our criminal justice system.” As a result, the Conviction Integrity Unit, which investigates cases of false convictions, have become a priority for Thompson. And while the number of units has seen tremendous growth since the establishment of the first Conviction Integrity Unit in 2002 in California, there are still only two dozen such units nationwide, likely leaving a large number of false convictions untouched.

Additionally, the report noted that while exonerations have historically been rare and always resulted in major attention from the media, such occurrences are becoming increasingly common – to the tune of three each week – and therefore now go largely unnoticed and receive very little attention.

However, an increase in interest of the justice system – and its mistakes – has been sparked in recent years, partially due to shows such as “Making a Murderer,” the controversial Netflix documentary that tells the story of Steven Avery who was exonerated of rape in 2003 after serving 18 years in prison, only to be convicted of murder four years after his release, under what some claim are questionable circumstances.

But while programs like “Making a Murderer” both reflect and contribute to awareness of wrongful convictions, the report warns things are typically not as dramatic as reflected in the film and officials rarely are able to focus all of their assets on a single case, as portrayed in the show.