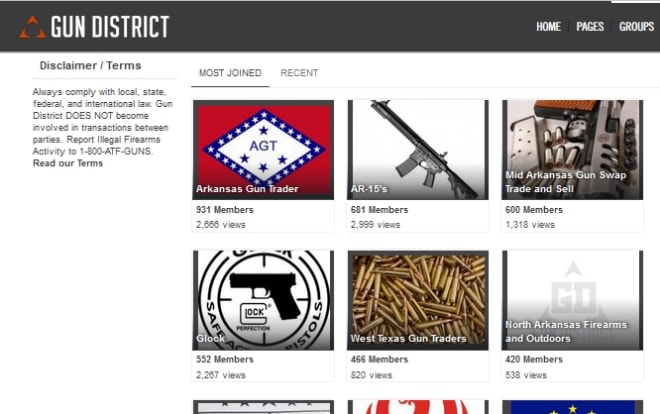 With gun groups on the social media outlet disappearing, some are looking elsewhere and moving to sites such as Gun District and MeWe that are more open to their needs.

Last Friday Facebook and sister site Instagram announced a policy change to restrict potential peer-to-peer gun sales, relying on tips by users of suspicious activities to which the social network would remove posts they believe are in violation. While gun control advocates cheered, many of the groups on the network who allowed private sales and trades chose to remain on the site and weather the promised storm of changes by adjusting their name or focus in the hopes of going along to get along.

However, some users woke up to find their favorite communities within the community gone. Some groups that had been using Facebook for years and had tens of thousands of members vanished overnight. While a few were reinstated and several remain, dissatisfied users started to look elsewhere.

“Well guys, They started hitting the parts groups and discussion-only groups, size nor creed matter,” reads a post by an admin of a Facebook gun group. “I strongly suggest that you move your personal accounts over to another site. This site has been bar none the best site I have had and I don’t want to lose our good citizens to a commie love fest that is now FB.”

And move they have.

Many once-vibrant Facebook firearms discussion groups, even if they linger on the social network, are hollowing out as their members jump ship for other outlets they take to be more inviting. Group admins set up new digs on other sites such as MeWe and Gun District then sent out messages and fired off invites through a myriad of free channels urging others to join them.

“We have averaged between 7,000 to 10,000 new members per day since the weekend,” Gun District’s founder Paul Glasco told Guns.com on Wednesday. “They started migrating on Friday when Facebook made the announcement, but when they actually started deleting gun groups on Monday they began signing up by the minute.”

The free platform, which bills itself as a pro-gun community designed for the firearms and outdoor enthusiast has mobile and tablet functionality as well as downloadable apps for Android and Apple. They have been busy this week upgrading server capacity and providing user support for their rapidly-expanding network.

Glasco said he started Gun District from the ground up last year as an outlet for firearm buffs to meet and socialize without the stigma of being in a secret group or worry about being banned over activity that is otherwise legal.

“We were tired of Facebook making it clear that Second Amendment supporters were in the same category as drug dealers and criminals,” he explained. “They seemed to love our gun traffic over there, but hated us as a pro-gun institution.”

Gun District has groups for those used to Facebook groups as well as pages for companies like Daniel Defense and Benelli and forums for those used to that style of interaction. The site has given away several firearms in periodic contests since its founding last year.

And yes, there are classifieds for those listing guns and other items for sale outside of a group, though Glasco cautions they follow all laws and rigidly ask members to do the same.

“We do allow the sale of firearms, firearms parts, and ammunition on Gun District, but our terms and conditions to become a member stresses that all state and federal laws must be adhered to when facilitating a gun sale on the site,” said Glasco. “We even post the ATF’s phone number for members to report suspicious or illegal transactions if they suspect them as such.”

Even as Facebook distances itself publicly from anything to do with private gun sales as it expands its new payment services, Glasco feels his platform has an abundance of corporate social responsibility in its business model.

“We support law-abiding citizens owning, using, selling and trading firearms. But we are adamantly against non-law-abiding criminals doing the same and we will do everything we can to prevent them from using Gun District as a means to do so as long as any such commerce is coordinated on our site.”

Further, for every 1,000 members on the platform, Glasco, who has a son with autism, gives a $100 donation to efforts to assist autistic children receive necessary treatment and therapies. 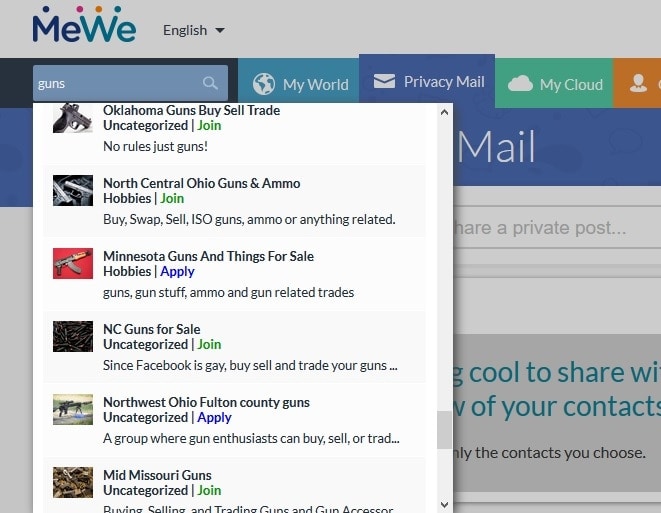 MeWe, who promises they do not track, or share user data unlike some networks, has been a popular destination for some pro-gun advocates leaving Facebook.

Another popular avenue for those leaving Facebook over gun issues is MeWe.

Launched in 2012 by founders Mark Weinstein and Jonathan Wolf, the group offers cloud storage, aggregation tools to help utilize contacts from other social media like Twitter but wrapped in a focus on user privacy.

A number of gun groups have been mirrored from Facebook onto MeWe, though the company is located in Sunnyvale, California, home to some of the toughest gun control laws in the country and does not mention being for or against firearms or firearms activity in its terms of service.

Nontheless, Weinstein told Guns.com on Friday the way his network operates is simple and hands-off.

“MeWe is not in the business of politics or censorship of law-abiding citizens, and has a clear Terms of Service that defines ‘acceptable use.’ Social media shouldn’t be in the business of being in your business,” said Weinstein.

What does Facebook think of the movement away from its billon-member site?

“We are not weighing in on this,” Facebook spokesman Jodi Seth told Guns.com on Thursday.

This article has been updated from its original with comment from MeWe.