Load of shotguns falls of a truck in New York, still missing 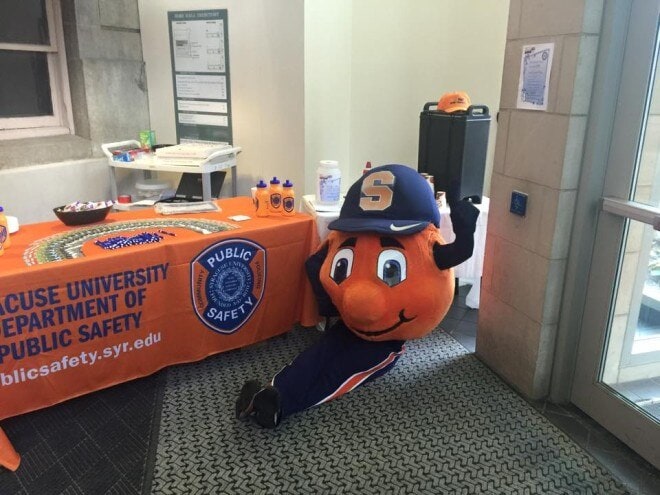 This is Otto Orange, mascot for Syracuse University, possibly performing a reenactment of the missing shotguns hitting the road. (Photo: SU-DPS)

Four shotguns belonging to the peace officers of the Syracuse University Department of Public Safety vanished after annual qualifications and the New York State Police are on the hunt.

Although the four shotguns came up missing after falling off the back of a truck (seriously) last October, as reported by CNY Central.com this week, the State Police advise they are still missing.

Apparently the guns were loaded in the truck after training at a nearby shooting range, then when Public Safety officers stopped for lunch, they noticed the tailgate had dropped down and the scatterguns were gone. After retracing their route and not locating the guns, they contacted NYSP.

As noted in a Syracuse.com interview last August with Chief Robert Maldonado, the SU-DPS has some 42 armed peace officers certified to make arrests on campus.

In other news– both orange and missing law enforcement weapons related– the Orange County sheriff’s investigators are searching for a department-issued AR-15 after a deputy left the weapon on his car and drove off in the Laguna Hills area last week.

See: The “Only Ones Qualified” for further information.