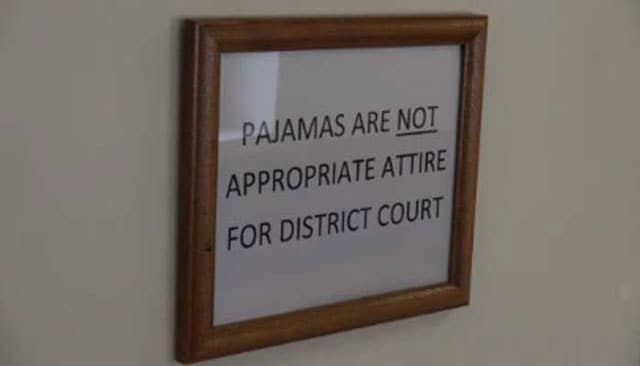 As a person who typically works out of a home office, I freely admit that I spend more time than I should working in my pajamas. However, I also realize there are certain places that – no matter how cute they may be – my PJs just aren’t acceptable attire. But apparently not all the folks in Columbia County, Pennsylvania, feel this way, which has prompted one judge to make it clear that he’s fed up with PJs appearing in his courtroom.

Judge Craig Long decided to put up a sign in the lobby of his courtroom declaring “Pajamas are not appropriate attire for district court,” because yeah, some people aren’t aware of this.

“We have a growing problem of people not dressing appropriately for court. And I just put it out there as a reminder of the code of conduct that should be followed when appearing in court,” Long explained. “It’s not a law. It’s not a rule or something that we can enforce. It’s just basically a reminder.”

Long said he hasn’t received any negative feedback about the sign, but did not indicate if it has helped to keep the courtroom a pajama-free zone thus far.