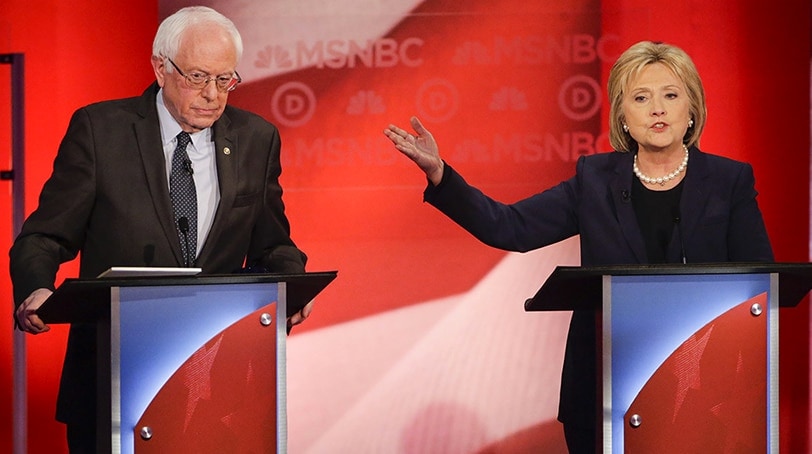 The attack came after MSNBC moderator Rachel Maddow brought up previous comments made by the Vermont senator saying Clinton wasn’t progressive enough to be the Democratic nominee.

While it is true Sanders voted several times against the Brady Bill, which when first introduced would have imposed a seven-day waiting period, he did vote in favor of an amendment imposing an instant background check, which, because it was 1993, the technology didn’t yet exist.

He voted against various amendments to the bill, including one that would have ended state waiting periods and in favor of one giving a person the right to know why they were denied a gun.

Sanders again voted against a compromise bill that was passed the same year with a mandatory five-day waiting period and the implementation of a new instant background check system.

Sanders attributed the down votes not to an opposition of states having waiting periods if they wanted to, but to federal overreach.

“He said he would be against waiting periods, and he kept his word to the people of Vermont,” said Sanders’ campaign manager, Jeff Weaver.

As noted by PolitiFact, the rural state of Vermont leans liberal, but also happens to have a high rate of gun ownership. Gun rights advocates point to the fact that the state also has the lowest crime rates in the country.

Sanders’ voting record is reportedly consistent with a majority of the voters in his state.

In fact, only about half of his votes in Congress relating to firearms have favored gun control. Sanders’ middle-of-the-road voting record has earned him criticism on both sides of the aisle, on the one hand being called a gun nut by liberals and on the other being claimed by gun rights advocates as one of their own.

Clinton also hammered Sanders for supporting a law that grants immunity to gun manufacturers, dealers and others when a gun made or sold by them is used in a crime.

Sanders did support the 2005 Protection of Lawful Commerce in Arms Act – which he drew criticism for – and has recently reversed course, again drawing criticism from his opponent who says he flip-flopped his position.