Deal to expand reciprocity in Virginia sails through Senate 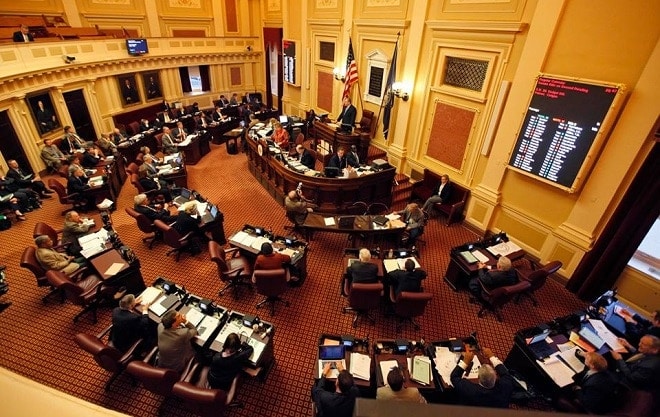 Nearly a third of the Democrats in Virgina’s Senate crossed the aisle Thursday to vote for a pro-gun bill to help gain concessions brokered by the Governor. (Photo: CSGV)

A measure directing the state Attorney General to enter into concealed carry permit recognition agreements with any state that offered them flew through the Senate on Thursday.

The Republican-backed bill picked up rarely seen bipartisan support from a half dozen Democrats to pass the chamber in a 27-13 vote on capital arranged through a deal with Gov. Terry McAuliffe announced last week to walk back Attorney General Mark Herring’s plan to no longer recognize concealed carry permits from half the states in the country over fears those licenses did not meet the same guidelines as Virginia.

“This bill reverses the actions taken by the Attorney General and restores gun rights to over 420,000 law-abiding citizens of Virginia,” said state Sen. Bryce E. Reeves, R-Spotsylvania, the measure’s sponsor.

Reeve’s measure, SB 610, recognizes valid concealed carry permits issued by any of the other 49 states in the nation while directing the Attorney General to enter into formal reciprocity agreements with any state open to the prospect.

Viginia currently has either agreements or defacto recognition with 30 states to honor permits issued to individuals, though as of March 1, under the Herring plan if SB 610 does not become law, this would drop to just five .

Gun control advocates who once stumped for McAuliffe delivered a petition to the Governor’s Office in Richmond on Thursday imploring him to reverse course once again and stop the deal.

“Governor McAuliffe has been a true friend to me in my darkest hours, but his deal with the gun lobby is a giveaway,” said Andy Parker, father or murdered WDBJ-TV reporter Alison Parker, who has become a vocal frontman for Everytown in Virginia. “This deal is bad for the Commonwealth and our country. I implore the governor, my friend, to reconsider.”

The Everytown petition, signed by 3,000, warns the bill moving rapidly through the legislature to a meeting with McAuliffe is dangerous and would allow people barred under Virginia’s own strict guidelines to carry concealed firearms. A similar Credo petition has some 1,500 signatures.

McAuliffe, however, is sticking to his guns for now at least and points to a Republican promise to put State Police at gun shows to run voluntary background checks on private gun sales and movement on a proposal to prevent some gun owners with certain protective orders from possessing firearms for the length of the order as worth the cost of the reciprocity bill.

“The Governor’s top priority is making our communities safer, and this compromise will do just that by taking guns away from domestic abusers and significantly expanding background checks at gun shows,” McAuliffe’s spokesman, Brian Coy, told the Washington Post.

The measure now heads to the House of Delegates where Republicans hold a healthy 2-1 majority and Speaker William J. Howell, who was present to debut the deal last week beside McAuliffe, will be on hand to help shepherd the bill through.