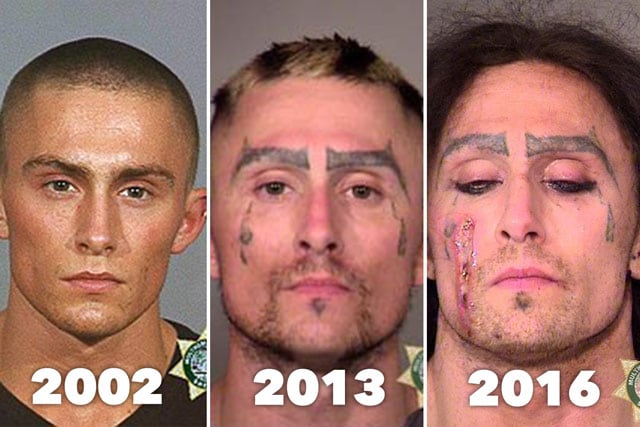 A look at Matthew Medlin’s mugshots over the years.

A 32-year-old man is behind bars after a standoff with police in Portland Saturday morning, but not before getting in one last bump of methamphetamine.

Police said they received a call around 1 a.m. about a man, later identified as Matthew Medlin, jumping on top of train cars at a rail yard. When authorities arrived on the scene, they found Medlin, who subsequently jumped into a dumpster car to avoid them.

Over the next four hours and during a hail and thunderstorm, officers then proceeded to talk with Medlin, who was armed with pieces of metal and rocks he was using as weapons. During that time, Medlin admitted to being high on methamphetamine and having been awake for 26 hours.

While still talking with the police, Medlin then shot up one last hit of meth before officers closed in, used a stun gun and subdued him. Medlin was arrested for numerous offenses, including first-degree criminal mischief, criminal trespassing, and an unrelated parole violation.