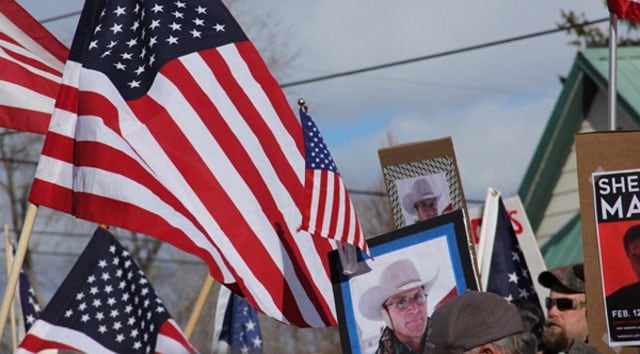 Protesters gathered near the wildlife refuge Monday while authorities continue to work toward a peaceful resolution with the last remaining occupiers. (Photo: Molly Young/The Oregonian)

As the occupation at a federal wildlife reserve in Burns, Oregon, pushes past the one month mark, four protesters remain at the refuge, while 16 – including the four remaining protesters – were indicted on federal charges Thursday.

The defendants are all accused of conspiracy to impede federal officers through intimidation, threats or force, the Oregonian reported. Among those named in the indictment are the protesters who were arrested last week during a botched traffic stop that left protester “LaVoy” Finicum dead under what some consider to be questionable circumstances. The incident, which involved the Oregon State Police and the Federal Bureau of Investigation, is being investigated by the Deschutes County Major Incident Team.

After his arrest – and Finicum’s death – occupation leader Ammon Bundy pleaded with the remaining protesters to abandon the refuge, go home and hug their families. And while a handful of protesters took Bundy’s advice to heart, the four who remain at the refuge said they will not leave until there is assurance that they will not face charges. With the recent indictment it’s unclear what those protesters will do next.

However, following the indictment, Bundy changed his tone, and instead of encouraging those at the refuge to leave, as he did on multiple occasions in the past, he took aim at law enforcement, telling them they needed to back off – a polar opposite of what was said last week.

“Government officials chose to end our educational efforts with attacks of force and it appears they attempt to do it again,” said Bundy in an audio-recorded statement made public by his attorneys. “Go home, Oregon State Police. You have already killed enough. Go home, FBI. It is time to end this.”

While the remaining protesters linger at the refuge, security surrounding the facility as well as nearby reserves, has been increased as a precautionary measure with fear of other similar protests occurring.

“No specific threats or incidents have occurred, but we remain vigilant to ensure employee and visitor safety throughout the region,” Jody Holzworth, regional spokeswoman for the U.S. Fish and Wildlife Service, said in an email to CBS News.

According to the indictment, an Idaho couple is among those left at the refuge. They are accused of meeting with the local sheriff in October and warning of “extreme civil unrest” if their demands were not met. Authorities also accused the couple of brandishing firearms while in the presence of law enforcement at the refuge, keeping officials from performing their duties.