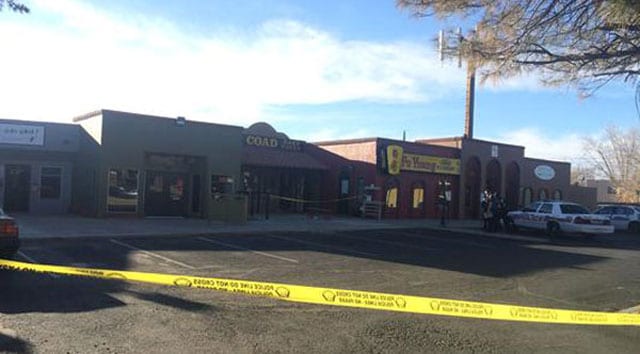 Local residents told reporters they were shocked to hear about the violent robbery in a part of town that is generally considered safe. (Photo: KOB)

An attempted robbery at a coin shop in Albuquerque over the weekend resulted in the death of one of the suspects after the shop owner armed himself and fought back against his assailants.

Several men entered Jim Coad Rare Coins around 2:15 p.m. Saturday, Jan. 30, intending to rob the place. One nearby witness, who did not wish to be identified, told KRQE that every day, like clockwork, the shop’s alarm sounds off at 5 p.m. So when she heard the alarm blaring continuously earlier in the afternoon, she immediately knew something was amiss.

Authorities say the suspects got into a physical altercation with the shop owner, who was beaten in the head with an undisclosed blunt object. But eventually the shop owner was able to retrieve a gun and fired a single shot, striking one of the suspects and sending them all fleeing. Then a call to 911 came in just after 3 p.m

“There’s chaos, we can hear people screaming in the background,” said Daren DeAguero, spokesman with the Albuquerque Police Department.

Another witness, Prisma Hernandez, told reporters she saw the suspects trying to make their escape.

“He was trying to run, but from so much blood loss he was fainting, almost falling on the floor,” Hernandez said of the suspect who was shot.

The suspects managed to make it out before police arrived, and according to DeAguero, the injured suspect left a massive blood trail behind. Some time later, they showed up at a nearby women’s hospital. The man was said to be in critical condition upon arrival, but medical personnel noticed something a bit unusual about the patient.

“There were coins and gold bars falling out of his pockets,” DeAguero said.

The suspect, whose name has not been released, underwent surgery, but despite efforts to save him, later died.

The shop owner was also transported to the hospital to receive treatment for the injuries he sustained during the robbery, but is expected to recover.

Police said witnesses provided conflicting accounts about the number of suspects involved and the type of vehicle they were driving, so locating the remaining suspects will likely prove difficult.