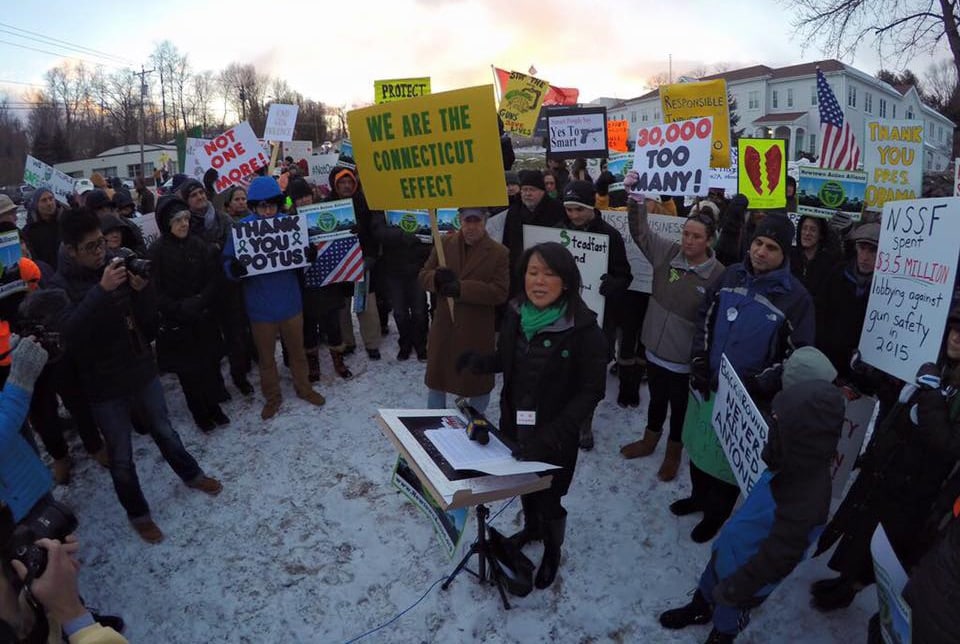 A Newtown Alliance gathering in January. Po Murray, center, is an outspoken member of the group. (Photo: Facebook)

The Newtown Action Alliance, a gun control group based in Connecticut, has sent a letter to all of their local businesses requesting that they make their properties gun free zones, and not allow firearms to be carried on their premises.

The NAA, a group that sprung up following the December 2012 mass shooting at Sandy Hook Elementary School in Newtown, sent a letter this week to all of the businesses in town following an incident where an individual legally open-carrying a firearm caused a stir, and calls for boycotting the business, in early January.

“We believe that no one needs to carry guns while they’re shopping for bread and milk,” said Po Murray, chairwoman of the Newtown Action Alliance, according to The Hartford Courant.

Murray told The Courant that while their letter is geared toward Newtown businesses, should it prove successful at home, she would like to push for businesses statewide, and eventually across the nation to consider their request.

According to the letter, the Newtown community “requires increased sensitivity, love, and compassion from local business owners,” due to the number of people in that community that “suffer from PTSD” as a result of the 2012 shooting. The group “strongly recommends” to business owners in the town that they “join our movement to create a safer and less intimidating environment” for children and families by banning the carrying of firearms in their stores.

Additionally, Connecticut’s U.S. Senator’s Chris Murphy and Richard Blumenthal, as well as Congresswoman Elizabeth Esty, sent the president of the Connecticut Food Association a letter in late January, requesting that his association put in place a policy that would restrict citizens from open-carrying firearms at all 240 of the association’s member companies, according to the Courant.

The National Shooting Sports Foundation, a firearms industry group headquartered in Newtown, said they had no response to the NAA’s letter, because it was not an “industry issue.”

Additionally, the NAA did not respond to a request for comment. However, Scott Wilson, the president of the Connecticut Citizens Defense League — a Second Amendment rights group — responded to the NAA’s actions, and said the letter from the NAA was a “flat-out wrong course of action,” and “an insane request.”

“Anyone who is carrying a firearm legally has been background checked on multiple levels and should be entitled to be able to protect themselves,” Wilson said in an e-mail.

“The second reason should be a reminder to the people in Newtown that if there were armed people in Sandy Hook at the time of the massacre, it may have been stopped in its tracks, or might have never happened at all,” Wilson continued. “To have the mindset that people should not ever be armed is utter madness and insanity. It’s an open invitation for slaughter.”